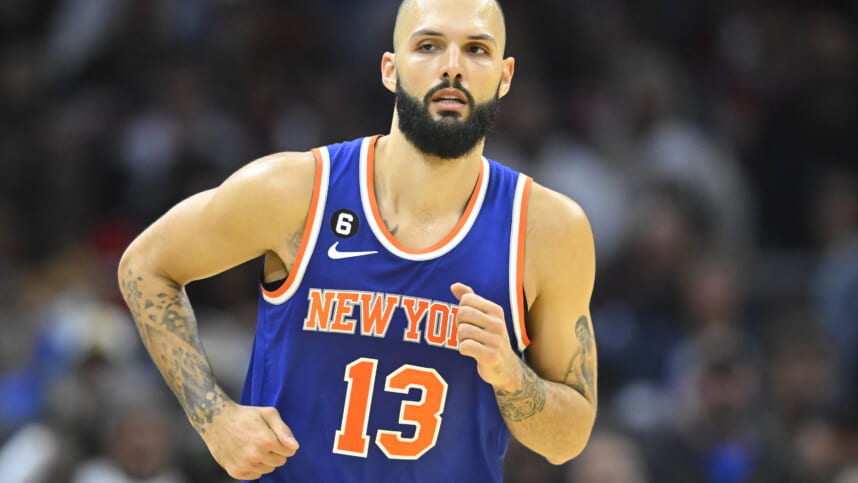 The New York Knicks made an unprecedented move early in the season on Friday night, reverting Evan Fournier to the bench in favor of second-year wing Quentin Grimes. The lineup change worked for the Knicks, as they snapped their 3-game losing streak and beat the Philadelphia 76ers 106-104.

Knicks head coach, Tom Thibodeau, treated Friday’s game as an experiment, as 12 players on the active roster saw the floor at some point during the game on Friday. Fournier played only 14 minutes off the bench, scoring just 2 points. Grimes and Cam Reddish each played 15 minutes, with the latter closing out the game with Jalen Brunson, RJ Barrett, Obi Toppin, and Julius Randle.

Fournier is playing in the second season of a 4-year, $72 million contract with the Knicks. As of now, Thibodeau has suggested that Fournier’s role in the rotation is diminishing quickly, which could also suggest that a trade involving the 12-year veteran is imminent given that New York could look to offload his current 4-year, $72 million contract.

The Knicks have a logjam of players, leaving the struggling Evan Fournier in a tough spot:

With the resurgence of Cam Reddish, the Knicks now have a logjam of players that are capable of getting starter minutes. Fournier’s fit has been in question since the signing of Jalen Brunson, as the backcourt pairing of the two has been rough defensively, Fournier averages 23.1 MPG, the second lowest among Knicks players with at least seven starts.

Fournier has also struggled to be a high-impact player offensively, averaging just 9.5 PPG, a lower mark than Obi Toppin, who has 10.8 PPG while only playing 16.5 MPG and having started 0 games so far. He is also shooting a career-low 39.1% from the field. Fournier also has by far the worst +/- of any Knicks player at a staggering -36, signaling a lackluster impact on both ends of the floor. He has struggled mightily to find his role on this revamped Knicks team.

Bottom line, the Knicks have too many quality players. Therefore, New York will have some gutsy decisions to make surrounding their rotation, with Fournier likely being the centerpiece of those decisions.

The Knicks put defense ahead of offense

It was evident that Thibodeau valued Grimes’ and Reddish’s defense over Fournier’s offense, and that helped the Knicks rally back from down 12 early in the 4th quarter Friday night vs. Philadelphia. The 76ers shot just 37.9% from the field tonight, including just 27.3% in the 4th quarter. Fournier played 5 minutes in the 4th.

Reddish shined as the 11th man off the bench, scoring 11 points on 4-4 shooting and making a clutch defensive play near the end of regulation to preserve the Knicks’ win.

Knicks fans had been pretty accustomed to Thibodeau sticking to his usual rotation, as was the case his first two seasons as head coach. As a result, he has faced numerous amounts of criticism for not changing rotations that were clearly not working.

Thibodeau explained his reasoning behind making a drastic lineup change early in the season during his pregame press conference before Friday’s game.

“Each situation’s different. So you just take it by, you’re looking at everything. You’re studying your team. You want to take a look at something. We didn’t have an opportunity to get a look at Quentin in the preseason. We were going to evaluate it then. So this gives us an opportunity to do it now.”

It would appear that Tom Thibodeau and the New York Knicks are preparing themselves for some big shake-ups to the rotation, which will potentially leave Fournier as the odd man out. Could Friday’s change be a one-time experiment? Possibly. However, it could be – and all the more likely is – a sign of big changes ahead, especially pertaining to Fournier.

There will be a better understanding of Thibodeau’s game plan when the Knicks head back home Saturday night to play the Boston Celtics, which ironically is a team in which Fournier has his highest scoring output against, averaging 18 PPG against Boston in his career.