Knicks among teams with interest in Jae Crowder 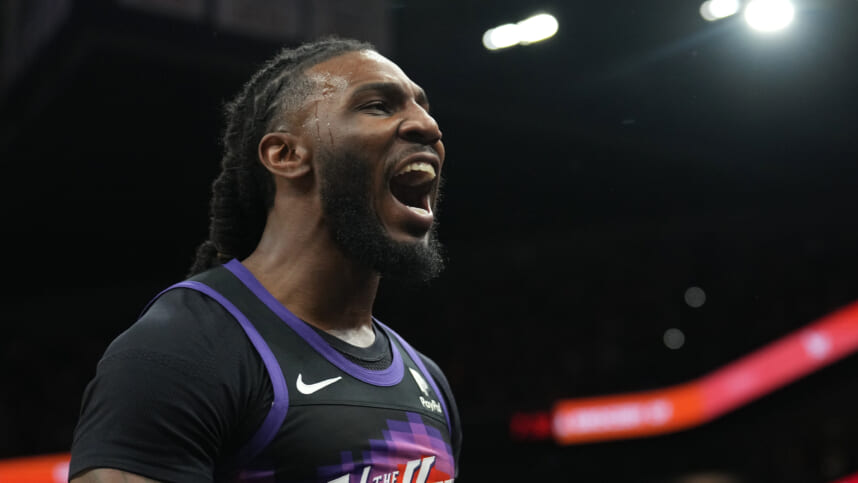 May 2, 2022; Phoenix, Arizona, USA; Phoenix Suns forward Jae Crowder (99) reacts against the Dallas Mavericks during the first half of game one of the second round for the 2022 NBA playoffs at Footprint Center. Mandatory Credit: Joe Camporeale-USA TODAY Sports

The New York Knicks are among a handful of teams that have expressed interest in Phoenix Suns forward, Jae Crowder, according to Hoops Wire’s Sam Amico.

Crowder is in the final year of a 3-year contract signed with the Suns prior to the 2020-21 season. With Cameron Johnson breaking out, Crowder has been the odd man out, seeing a massive role reduction with the Suns.

As a result, Crowder is currently not playing for the Suns as the two sides are working out a trade for the veteran forward due to the impasse over Phoenix’s rotation. Crowder’s last game was Game 7 of the 2022 Western Conference Semifinals, back on May 15.

The Knicks join teams such as the Miami Heat and the Atlanta Hawks in the running for Crowder.

What could Jae Crowder bring to the Knicks?

Crowder brings a combination of size, solid perimeter defense, and good shooting to the table, all things that could benefit the Knicks big-time.

Crowder’s 6’6″, 235 lbs frame would provide some serious overall strength to the Knicks. He also has displayed great footwork on the defensive end, as he posted his third-best defensive rating of his career last season at 105.3.

The Knicks have had major struggles with perimeter defense this season, as they have allowed the most 3PM made among Eastern Conference teams and the 2nd most in the NBA at 311, so Crowder could certainly fix the issues in that department for New York.

On the offensive end, Crowder would provide some very solid shooting from long-range. Crowder has a 34.6% 3-point percentage for his career and shot 34.8% from 3 on 5.4 3PA/game last season, a solidly efficient rate.

Crowder has established himself as an excellent shooter off of the catch-and-shoot, which could blend very well with the superb playmaking from Knicks point guard, Jalen Brunson, who is currently averaging 6.9 APG, a mark that ranks 6th among all Eastern Conference guards.

Crowder also brings an experienced veteran to a young Knicks squad. Crowder has been in the playoffs in nine consecutive seasons and has been in the NBA Finals in 2 of the last three seasons. His play style allows him to fit seamlessly in virtually any system, and he would have by far the most playoff experience on the Knicks roster. The aforementioned playoff experience could be a large motivator of players on the roster who have barely seen the playoffs.

Who could the Knicks trade for Crowder?

Evan Fournier’s apparent removal from the Knicks’ rotation would make him the biggest trade option on the roster. Other potential names to include are Derrick Rose, Quentin Grimes, and Obi Toppin.

Given that some players are making large amounts of money with a lack of consistent playing time, the Knicks may look to move some of those contracts to free up cap room.

The Knicks also have several draft picks that they acquired this past offseason, so New York has a plethora of assets internally that they can use as in an offer for Crowder.

As the Jae Crowder sweepstakes heat up, the Knicks are now in the mix. He could provide quite a bit to a Knicks team that has been mediocre basketball up to this point, but will the Knicks’ front office press the right button?

Only Leon Rose and his staff know that answer, but the answer could be revealed very, very soon.