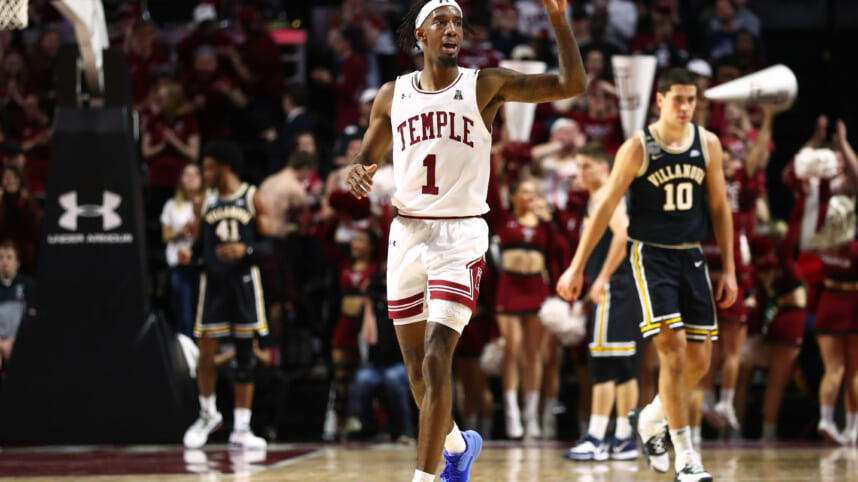 Feb 16, 2020; Philadelphia, Pennsylvania, USA; Temple Owls guard Quinton Rose (1) looks to the bench in the first half during the game against the Villanova Wildcats at Liacouras Center. Mandatory Credit: Kyle Ross-USA TODAY Sports

The New York Knicks are bringing in local kid Quinton Rose to the training camp which begins on Tuesday.

Rose’s signing raised the Knicks’ training camp roster to 19, one short of the maximum allowed.

Rose played four seasons at Temple University, averaging 14.4 points, 4.3 rebounds and 2.5 assists in 31.3 minutes. He was a two-time All-AAC Second Team selection and led the Owls to the NCAA Tournament during his junior year after posting 16.3 points, 3.8 rebounds and 2.5 assists as a starter. Despite his outstanding effort, he went undrafted in 2020.

Rose joins DaQuan Jeffries on Exhibit 10 deals. They are the most likely candidates to be waived after the training camp as the Knicks are only allowed to have 17 players — 15 on standard roster and two two-way players — on opening night.

Barring any trade or big-time free agent signing, Svi Mykhailiuk and Ryan Arcidiacono, who both signed one-year deals, are expected to round up the Knicks’ opening-day roster.

Feron Hunt and Trevor Keels are the Knicks’ two-way players.

Rose and Jeffries will likely play for the Westchester Knicks in the G League. Last season, Rose averaged 7.4 points, 3.5 rebounds and 1.6 assists in 31 games at Westchester, while Jeffries posted 14.3 points and 3.9 rebounds in 16 games with College Park Skyhawks.