Knicks’ tough loss to Raptors magnifies one of their weakest links 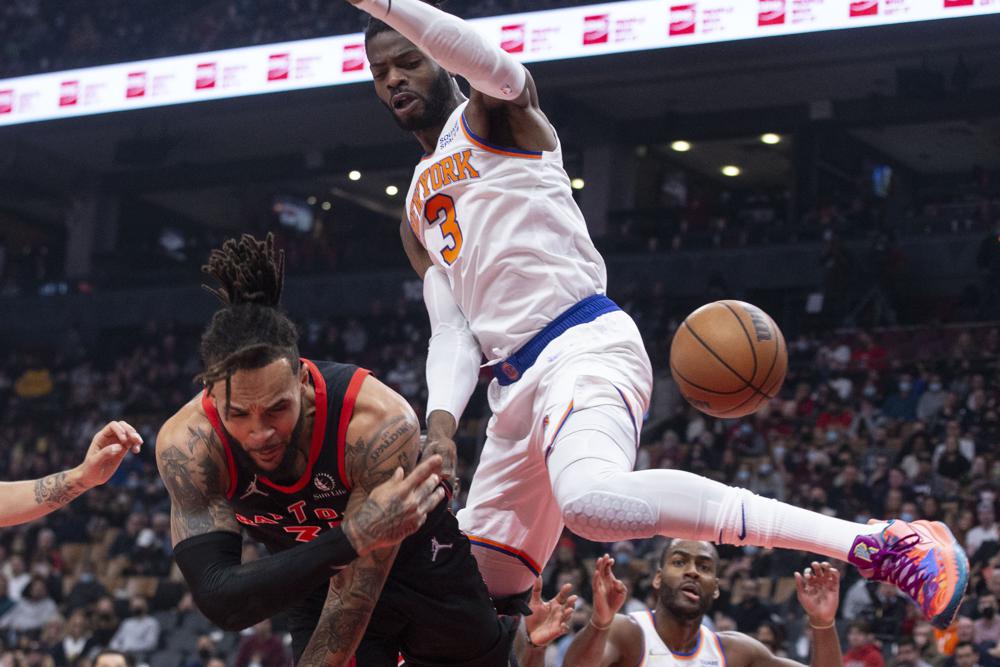 The New York Knicks could have completed their 20-point comeback if only they secured the long rebound, which led to Gary Trent, Jr.’s backbreaking triple.

That shot swung the momentum and the lead back to the Raptors as they escaped with a hard-fought 90-87 win against a Knicks team that showed great resolve after another poor start.

“The second shot hurt us,” New York coach Tom Thibodeau said.Â “It was a shame not to come out of here with a win, but the way we started the game really hurt us.”

The same issue plagued the Knicks at the start of the game. They dug a 20-point hole in the first quarter as they gave up five more rebounds to the Raptors and four turnovers. Toronto took advantage and cashed in with a combined 11 points on transition and off turnovers. It didn’t help that the Raptors shot 5 of 9 3s and took seven more free throws.

“So we got into a big hole and had a fight,” Thibodeau said. “And then we downsized to get more shooting onto the floor and then the rebounding hurt us in the end.”

After Obi Toppin missed two consecutive three-pointers in the fourth quarter, Thibodeau decided to pull him out. By the time Evan Fournier subbed Toppin, the Knicks’ energetic second-year forward had already logged in his first career double-double with 19 points and 10 rebounds in 24 minutes, all career-highs. But his missed shots were a sign of exhaustion after playing straight from the final 2:12 of the third quarter up to the 3:40 mark of the fourth quarter. That was more than 10 minutes straight of running up and down the court.

Thibodeau’s tactical adjustment to counter the Raptors’ zone defense down the stretch backfired as the small-ball lineup on the floor got outrebounded in the most crucial time. The Knicks’ closing lineup of Derrick Rose, Alec Burks, Evan Fournier, Barrett, and Randle outscored the Raptors, 10-6, but gave up two crucial offensive rebounds in the most pivotal play of the game.

“You can’t take off, you can’t stand and stare. You got to turn and check,” Thibodeau said. “Because of the way people shoot, there are going to be a lot of long rebounds. That’s your guards’ responsibility but oftentimes you see offenses are inverted where the big guys are out. And so you have to find a body. That’s what we didn’t do. That has to be corrected.”

But the film tells otherwise.

Fournier does a good job of contesting GTJ without fouling and both RJ and Rose do a good job of boxing out bigger guys. Julius also crashes the boards as the only big on the floor but the Knicks give up a couple of long offensive rebounds, giving up a backbreaking 3 pic.twitter.com/Cn2KZ9cTZ0

Rose, Burks, and Barrett all found a body to box out after Trent, Jr.’s first three-point attempt hit the back iron. But they could only do so much against 6-8 Pascal Siakam, 6-7 Scottie Barnes, and 6-9 Chris Boucher. Randle missed the rebound because he went too deep, and Siakam tapped the ball out to Fred Van Vleet, who missed another 3-point attempt. Barnes got the long rebound from the left elbow and passed it to Van Vleet, who quickly swung it back to Trent, Jr. for his redemption shot.

The Raptors grabbed the lead, 89-87, and never relinquished it.

“We outrebounded them but we gave up costly ones when it counted the most,” Thibodeau said.

The Knicks won the battle of the boards overall, 55-48, and had two more offensive rebounds than the Raptors. Two offensive rebounds cost them the game. Even if Thibodeau can correct the Knicks’ gang rebounding deficiency, it will just be a band-aid solution. It’s not that the Knicks guards lacked the effort and awareness to box out. But the reality is, the Knicks’ inability to field a rebounding big man who can also be a threat against the zone defense is the biggest weakness of the current roster.

Even with Nerlens Noel and Mitchell Robinson not at full health, the Knicks are still among the top 10 rebounding teams in the NBA. Last season, they finished tied for eighth with 45.1 per game. After Friday night’s loss in Toronto, the Knicks are ninth with 45.7 rebounds per game.

Noel and Robinson only played a combined 35 minutes and 15 seconds on the floor against the Raptors due to lingering health and conditioning issues. They produced 10 points and 10 rebounds combined. But even when they are healthy, they don’t possess a decent outside shot or even a midrange jumper that can keep the defense honest.

Toppin can grow into that role if he develops a consistent outside shot. But until that happens, they need outside help.

If the Knicks are to salvage this season, point guard won’t be the priority at the trade deadline. A big man who can space the floor on offense and be a decent pick-and-roll defender and rim protector should be their top target. That way, they can optimize Randle as a bully point forward next to Burks. A floor-spacing center will unclog the paint for Randle and even for Barrett to attack the rim rather than settle for long jumpers.