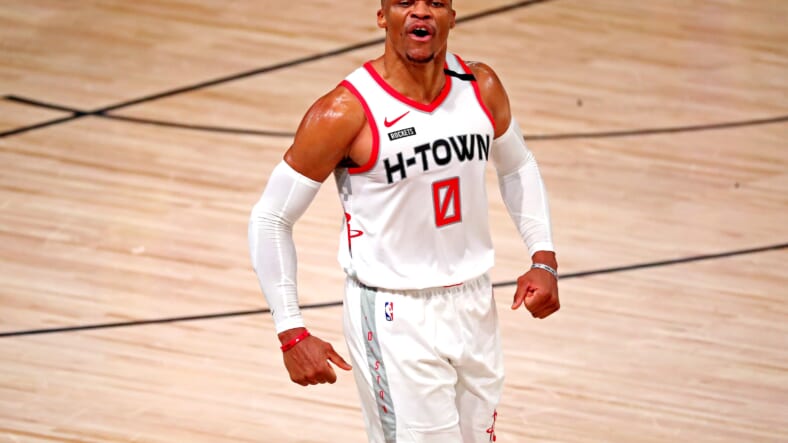 Sep 4, 2020; Lake Buena Vista, Florida, USA; Houston Rockets guard Russell Westbrook (0) reacts after a play during the fourth quarter against the Los Angeles Lakers in game one of the second round of the 2020 NBA Playoffs at AdventHealth Arena. Mandatory Credit: Kim Klement-USA TODAY Sports

Another day, another superstar has been linked to the New York Knicks.

The Ringer’s NBA insider Kevin O’Connor dropped some bombshell on The Mismatch podcast on Tuesday.

Both the Knicks and the Clippers need a capable lead guard to right their respective ships.

The Clippers squandered a 3-1 series lead to the Denver Nuggets in the Western Conference semifinals.

The Knicks, on the other hand, have missed the postseason for the seventh straight season.

Westbrook came to the Rockets via trade from Oklahoma City Thunder in exchange for Chris Paul, who is reportedly on the move again.

Paul, who has also been linked to the Knicks, is now the subject of a trade discussion between the Phoenix Suns and the Thunder, as per ESPN.

Rockets owner Tillman Fertitta, meanwhile, has maintained that “there’s no reason to blow up” the team’s core.

â€œThis is still our window, the next couple of years. James [Harden] and Russell are in their early 30s,â€ Fertitta said last month. â€œWeâ€™re not blowing up anything. We plan on contending.â€

â€œAs far as James [Harden], he is our guy,â€ Silas said during his live interview on ESPN. â€œIn the interview process, I talked to both James and Russell [Westbrook], to let them know, the reason why I wanted this job was because of them. I expect those guys to be here.â€

Silas added the Rockets plan to add a traditional center as the team moves on from former GM Daryl Morey’s small-ball approach.

But with 90 percent of the teamâ€™s salaries already tied to the trio of Harden, Westbrook, and Eric Gordon, the Rockets have limited options to upgrade their roster.