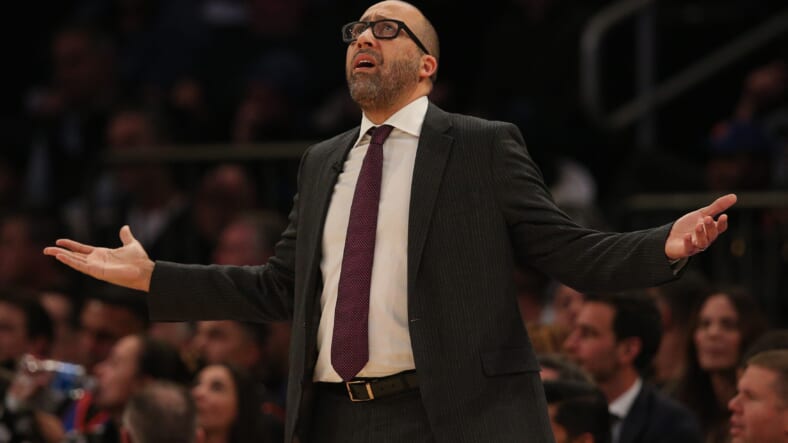 The New York Knicks need Chris Paul more than he needs them.

“I think the Knicks have to be open to a lot of different things, Fizdale said on ESPNâ€™s â€œThe Jumpâ€ on Friday. “Would he be a great fit for them? Absolutely. I think he would fit those kids â€” Mitchell Robinson going to the rim, they get more spacing, more shooting. Absolutely, he would fit. The big stage. He doesnâ€™t get sick,” Fizdale said.

Paul would present both a short-term and long-term fix for the Knicks.

The 10-time All-Star would instantly help repair the Knicks’ credibility and become the face of culture rebuilt in New York that may attract marquee free agents to come and join him. At the same time, he will also fast-tracked the developmental timeline of their young core and perhaps lift them into a fringe playoff contender. However, Fizdale doesn’t see why Paul should want to go to a rebuilding team like the Knicks.

“His position fits the young players that they have. Mitchell Robinson needs a Chris Paul. RJ Barrett needs a Chris Paul. Kevin Knox needs a Chris Paul. Because of the position placement that’s why I say he could end up, especially in the bottom of the East you don’t know what’s gonna happen. He could squeak in probably if they have a couple of little things here and there but for him, I just don’t think it’s the right move for what he’s trying to get out of his career,” Fizdale explained.

“Awful fit! Awful fit on so many levels,” Elhassan said. “Number one, the Knicks’ whole thing on the summer of 2019, we missed out, guess what 2021 big free agents on the way, let’s keep that flexibility. So every deal they signed was either a two-year deal or a one-year deal. By doing this deal, they basically say: ‘you know what? Nevermind 2021!’ The plan, although we may not agree with what they did short-term. But in the long-term, the idea of kicking the ball ahead of 2021, that something we can get on board of, and when you talk about Chris Paul at his age and that salary the last couple of years of his deal, it just doesn’t fit with the timeline the Knicks are on it.”

“And from Chris Paul’s perspective, what am I gonna do? I’m going to a team and help them be the eighth seed and get swept in the first round? That’s not what he’s looking at this point of his career.”

Pierce would have wished for Paul to be in New York earlier in his career, but not this time where he should be chasing for a ring.

“C’mon man, you’re talking about a vet who’s obviously would be a Hall of Famer and a team that’s on a rebuild, a guy looking to secure his legacy by winning a championship. It’s a terrible fit just like what Amin said,” Pierce said.

Been there, done that

Fizdale, though, sees the wisdom of trading for Paul even if it hurts the cap space of the Knicks for the loaded 2021 free agency.

â€œI think you canâ€™t try to go big-game hunting all the time,â€™â€™ Fizdale said. â€œYou may plan for 2021, and think, I got this money. But that doesnâ€™t mean youâ€™re going to get the guys. I went through it.â€

Fizdale and the Knicks sounded confident last year ahead of the free agency that they would net Kevin Durant and Kyrie Irving after dumping Kristaps Porzingis to create a space for two superstars. But their plan backfired when the duo went instead to their across-the-bridge rival Brooklyn Nets, much to the Knicks fan base’s consternation.

Fizdale subsequently got fired in the middle of a disappointing season that saw the Knicks ending up in the lottery again. Erstwhile team president Steve Mills would soon follow months later.

Scott Perry remained the Knicks’ general manager, and Fizdale hoped that the organization had learned their lesson.

“I think you gotta be meticulous about building your team and not think you’re just gonna land these big sharks all the time and so if you acquire winning pieces along the way that fit into the mentality you’re trying to build on your team, the type of guys you want to bring in to build your culture, you snatch them up while you can,” Fizdale said.

“And if a big fish is out there, yeah, you take him, but that should not knock you off from what you’re trying to do, or you see opportunities to improve your team along the way until 2021, you should take those opportunities.”

[wpdiscuz-feedback id=”uzdugkn5ao” question=”Do you agree with David Fizdale?” opened=”0″]Fizdale’s advice is to stay on course with what Mills and Perry have envisioned.[/wpdiscuz-feedback] It remains to be seen whether Leon Rose’s leadership will produce better results that would bring the Knicks back into relevancy.