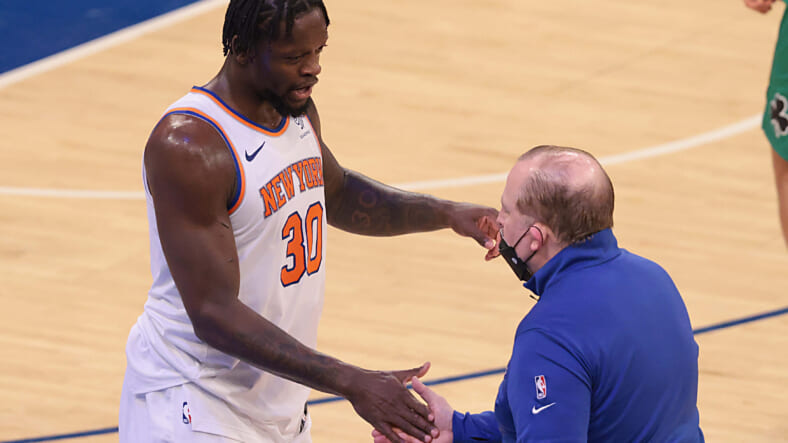 Julius Randle gets it.

As much as heâ€™s embraced being the New York Knicksâ€™ franchise cornerstone, he knows in his heart he canâ€™t do it alone. His first playoff appearance showed him he needs more help to compete for a championship.

Randle became an All-Star, All-NBA Second Team forward, and the Most Improved Player of the Year last season that fueled the Knicksâ€™ surprising playoff run. But they were bounced by Trae Young and the Atlanta Hawks in five games in the first round, exposing their lack of talent and firepower.

That became one of Randleâ€™s biggest considerations why he opted to sign a cheaper extension now rather than wait for next summer when he would have been eligible to sign an extension in the neighborhood of $200 million.

â€œFor me, itâ€™s kinda like a no-brainer,â€ Randle said after officially signing a $117 million, four-year extension with the Knicks.

He was motivated to help the Knicks build a contender during his prime years. After all, heâ€™s already set to earn $180 million over seven years with the Knicks, including the original $63 million, three-year deal he signed in 2019.

â€œFor me, I just truly enjoy being a Knick at the end of the day. And I donâ€™t think thereâ€™s a better place to win a championship than here. And I want to be part of that, and I felt like I can help be a part of that,â€ Randle said. â€œI felt like me signing this extension will help Leon (Rose) and the other guys get pieces and continue to build the team so that we could have that opportunity.â€

The Knicks have retained most of their core that finished fourth in the East last season, losing only Elfrid Payton and Reggie Bullock. But they brought in four-time All-Star Kemba Walker and a more dynamic scoring wing in Evan Fournier as upgrades while adding promising rookies â€” Quentin Grimes, Miles McBride, and Jericho Sims â€” from the draft.

As much as Randle hailed the Knicksâ€™ offseason moves showing his excitement to grow with this team, Rose celebrated his extension as a big win for the franchise.

â€œJulius RandleÂ embodies everything you want your star player and leader to be about, and we couldnâ€™t be happier about the long-term commitment we made to each other,â€ said Rose in a statement. â€œHis hard work and dedication to his craft are second to none, and what he did last season wonâ€™t be forgotten by New Yorkers any time soon. We canâ€™t wait to see whatâ€™s next for him.â€

Two summers ago, Randle wasnâ€™t viewed as a star player despite putting up gaudy numbers, albeit on losing teams. He arrived in New York as a consolation prizeÂ after the past regime spectacularly lost in the Kevin Durantâ€™s sweepstakes.

His first year with the Knicks didnâ€™t go according to his plans, and the fans wanted him out of New York.

It felt like his marriage with the Knicks was headed to an ugly divorce.Â Until Rose and co. came along and saved the relationship.

The family atmosphere and the culture built around trust and accountability that the new regime established last year resonated with Randle, who is every inch a family man. It rekindled his love for the game that he nearly lost playing with losing teams.

â€œFor me, the money was one thing. But for me, itâ€™s more about the situation as far as my happiness â€“ the basketball situation and my family, just being stable, being in New York, and really just continue to build this thing up. When I signed here two years ago, this was my vision â€” to be able to lock in something long-term and build something from the ground up. And thatâ€™s what weâ€™re doing.â€

Randle knew he had an opportunity to make more money next summer, and he wrestled with that thought.

â€œBut at the end of the day, I had stops along the way in my career where I havenâ€™t been that happy playing â€“ I understand both sides of how hard this game could be, how hard it could be being on a team where chemistry is not right. And itâ€™s tough showing up to your job every night. For me, I truly enjoy showing up to my job every day. I truly want, and Iâ€™m happy being a Knick playing in front of the fans and everything. I went back and forth on it, but at the end of the day, you know, I wanted to win, and I felt like this could help us win. And stability was important.â€œ

Now that stability has found its way back to Knicksâ€™ vocabulary, Randle has indeed found a home after spending his first six years in the NBA drifting around looking for a lifesaver to hang on.

â€œI think the biggest thing is the culture. That was part of the reason why I took the deal. I talk to Wes (William Wesley) all the time, and he says, â€˜itâ€™s family, family, family-business like.â€™ It is what it really is. Weâ€™re all family. We enjoy being around each other. And we have that trust,â€ Randle said.

â€So even if I left money on the table, I trust that, in the long run, it will gonna pay off. I trust Leon, Wes, Scott (Perry), Thibs (Tom Thibodeau), and all those guys that theyâ€™re gonna give us the best possible chance and put us in the best position now and in the future to bring a championship to the Knicks. Thatâ€™s what itâ€™s about.â€

Randle got stability. The Knicks have maintained flexibility.

Itâ€™s been a long while since everyone â€” from star player to coach to front office â€” is on the same page in New York.

After enduring losing for so long, Randle finally enjoyed winning. He now understands how to succeed in the biggest yet toughest market in the NBA.

â€œNew York basketball is all about a lot of heart, hustle, guys who come out hard every night. No matter how talented you are, the fans, the city, they donâ€™t care. They want to see you work hard and give your best every night,â€ Randle said.