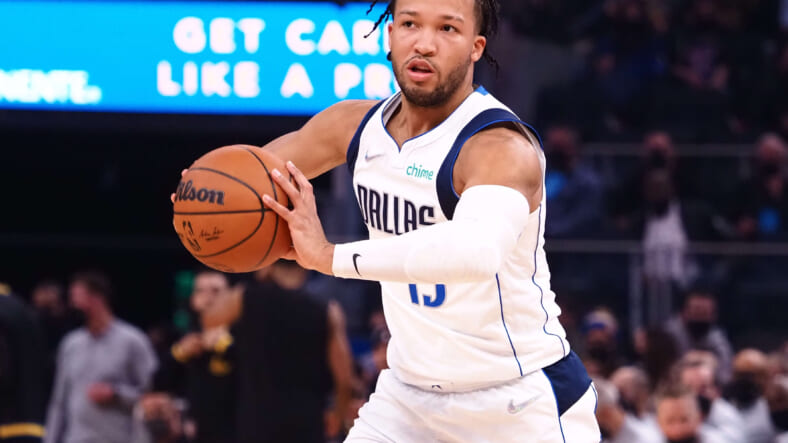 The New York Knicks are expected to land Jalen Brunson when the NBA free agency begins Thursday at 6 pm ET, according to multiple reports.

After projecting confidence early on that they can retain Brunson, the Dallas Mavericks are reportedly growing pessimistic about their chances.

Wrote Friday that the Knicks had amassed "major momentum" in their pursuit of Jalen Brunson after draft night.

There is a growing resignation in Dallas, sources say, that the Knicks are indeed Brunson's top choice and his inevitable destination.

The domino began to fall when the Knicks hired Jalen Brunson’s father, Rick, to fill Kenny Payne’s hole in Tom Thibodeau’s coaching staff in New York. Then it continued last week with the Knicks’ Draft Day trade with the Detroit Pistons that saw them unloading Kemba Walker’s $9.2 million salary.

The Knicks could clear the necessary cap room, which is reportedly north of $25 million if they can dump Nerlens Noel or the injured Alec Burks into another team’s cap space of trade exception. They have explored trading Noel into Los Angeles Clippers’ $9.7 million trade exception. On the other hand, Burks is reportedly generating interest from the Boston Celtics, among other contenders.

At this point, it's widely anticipated that Jalen Brunson will go to the Knicks on a four-year deal in excess of $100M. It remains to be seen how New York will clear the rest of the necessary cap space and whether the Mavs can work a sign-and-trade to recoup assets.

The Mavericks could hope that the Knicks would not be able to clear more cap room before Thursday in order to recoup something in return for Brunson.

On top of the deep ties that bind Brunson and the Knicks’ brass, a major part of the allure of coming to New York is the opportunity to become the full-time point guard. The Knicks have been perpetually searching for an answer to their glaring hole.

Part of the Knicks pitch to Jalen Brunson, I’m told, is the opportunity to be a full time point guard. In Dallas, Brunson can play with Luka. But Luka is the de facto point guard. In New York, Brunson would run the show.

Brunson will come in and become the Knicks’ starting point guard. He is expected to steady the Knicks’ backcourt coming off a career year.

Playing second fiddle next to Luka Doncic, Brunson averaged career-highs 16.3 points, 3.9 rebounds and 4.8 assists while having an efficient 50/37/84 shooting split. Brunson stepped up to another level in the playoffs, averaging 21.6 points, 4.6 rebounds and 3.7 assists on a 46/35/80 shooting split.

The 25-year-old Brunson carried the Mavericks on his back to a 2-1 series lead against Donovan Mitchell and the Utah Jazz, including an NBA playoff career-high 41 points with Doncic on the sidelines.

Brunson is projected to crack the top 15 highest-earning point guards in the NBA with his imminent deal with the Knicks.