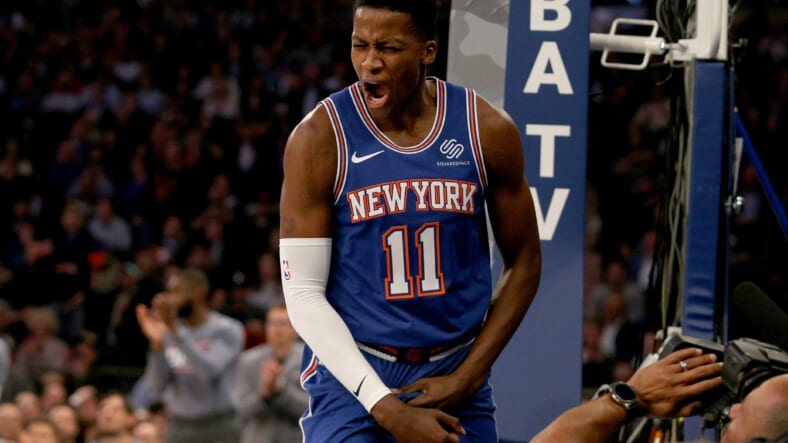 The 2019-20 New York Knicks season has quickly gone down the drain.Â  It began with a lot of optimism of making the final few playoff spots.Â  Now sitting 7 games out of the the 8th seed, it appears the season has gotten out of hand, again.

While all the rumors of trading Marcus Morris, Dennis Smith Jr. and Bobby Portis are circulating, it’s nice to hear Morris wanting to be with the Knicks long-term.Â  He’s 30-years old and isn’t in the long-term plans for the organization.

However, the Knicks need a change and going all young is the way to go.Â  Not playing some of the younger players is putting a bad taste in the fans mouths.

Kevin Knox is a prime example.Â  Knox has severely underachieved this season.Â  All his stats are down from his rookie campaign along with his confidence.Â  Knox put the work in this off-season to improve and it was seen to begin the year and it had dwindled away with all other aspects of his game.Â  For him to be apart of the future plans, he needs a significant increase in minutes.

The future players consist of RJ Barrett, Mitchell Robinson and Julius Randle.Â  For the most past, Randle will be in the Knicks plans for the next two-years.

Others that should be in the future plans are Frank Ntilikina, Kevin Knox, Allonzo Trier and Elfrid Payton.Â  Even players down in the G-League like Kenny Wooten Jr., Lamar Peters and Ignas Brazdeikis, who has been on the roster, need a chance to showcase their skills.Â  There could be a hidden gem with one of those 3 players to contribute to the Knicks young future.

It’s time for the New York Knicks to go all-in on playing, developing and growing their youthful future.