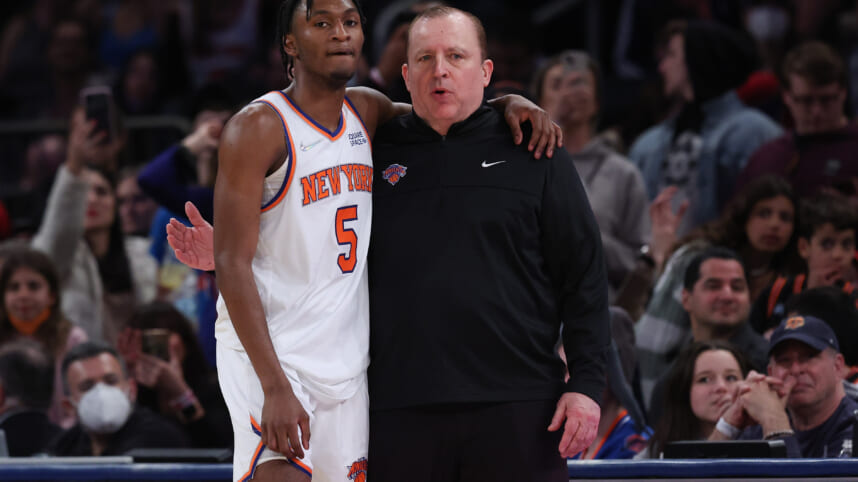 The New York Knicks capped off a five-game west coast trip with a dazzling 129-119 victory over the Oklahoma City Thunder on Monday night, ending a road trip that saw New York go 3-2. This impressive 5-game stretch came on the cusp of head coach Tom Thibodeau being under fire for a rough stretch that saw porous defense on the floor.

After their horrific loss to OKC prior to the west coast trip, Ian Begley of SNY reported that Thibodeau’s seat as Knicks head coach was “getting warm.” However, this recent stretch of better play against solid west coast teams may increase Thibodeau’s job security for at least a little while longer.

Monday’s win moves the Knicks back to .500 at 9-9, a defining mark on their season through the first 18 games. They’ve been a solid offensive team but a horrendous defensive team when looking at their season overall.

However, there were some flashes of hope presented by Thibodeau’s rotations during the west coast trip that could give Knicks fans something to be excited about, especially on the defensive end.

With Cam Reddish, Derrick Rose, and Mitchell Robinson dealing with injuries, Tom Thibodeau has been forced to mix and match his rotations with the options he has available.

In the last two games, Quentin Grimes has played at least 30 minutes, starting in both, when prior to that, he had only played upwards of 40 total minutes all season. Thibodeau could have decided to go back to Evan Fournier, who is currently out of the rotation, but he decided to give Grimes the starting nod.

The Knicks would win just one out of the two games, but Grimes played fairly well and defended the opposition’s best player solidly.

Fans had been clamoring for Grimes to see the floor more as the Knicks badly needed some lockdown perimeter defense, which is what Grimes provides. Many were also scratching their heads as to why Thibodeau would not play his best defender when the team was clearly laboring on that end of the floor.

Thibodeau seemed to finally press the right button by giving Grimes the opportunity rather than going back to Fournier, as the defense was much tighter overall with him on the floor.

Thibodeau has also been giving second-year backup big Jericho Sims more burn, who averaged 20.4 MPG playing in every game over the five-game west coast swing. Sims played very well in the opportunity given, averaging 7.2 PPG to go along with 8.2 RPG and a stellar 1.4 BPG during the road trip.

Thibodeau’s trust in Sims has evidently grown, as he had Sims as part of the Knicks’ closing lineup in their wins over Denver and OKC.

This new-found trust in the younger pieces by Thibodeau has given the Knicks some much-needed life after having some brutal stretches, which could win back those who criticized his lack of playing the younger, more athletic pieces he has in his arsenal.

Even if these rotation changes were just contingency plans to fill the injury void, it’s still encouraging to see Thibodeau utilize his options in a much more effective manner, and the results have shown its effectiveness.

Thibodeau may have just saved his job for the time being with this creativity.

The Knicks will return home on Friday to take on the Portland Trail Blazers.