Exploring the idea of the Knicks possibly trading away Derrick Rose 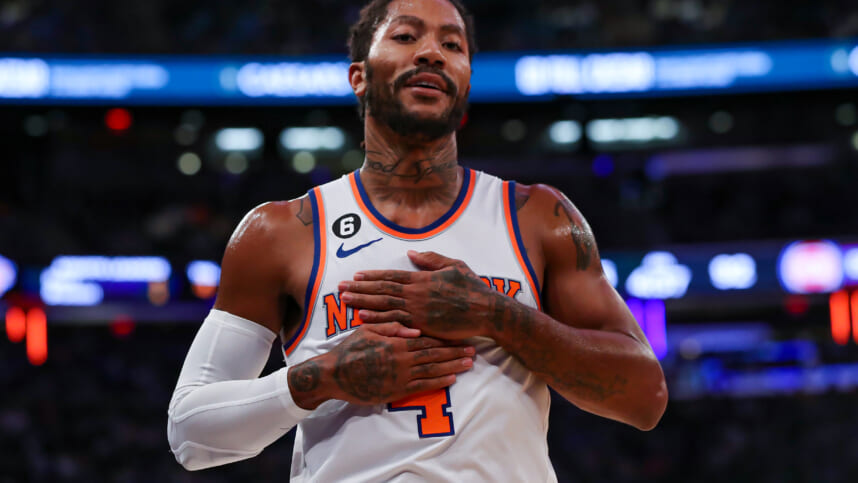 Last season for the Knicks was the story of not having a point guard. This year, it is the polar opposite: they have a plethora of point guards, and Derrick Rose is back from injury.

Despite Rose being healthy now, the 14-year veteran suddenly has found himself in the midst of a logjam. The initial plan was to have Rose pilot a bench unit that included Immanuel Quickley and Quentin Grimes, two key pieces that led the second unit while Rose was out.

Grimes’ foot injury threw a wrench into things, as it forced Cam Reddish, who had struggled to find playing time even with Rose out last year, to be inserted into the rotation.

With this, the Knicks now have some decisions to make with Grimes’ imminent return on the horizon. Where exactly does Rose fit? Will the Knicks move on from him?

Rose is currently under contract with the Knicks through the 2024 season. He is slated to make $14.5 million this season and $15.5 million next season before entering free agency.

Rather than wait the contract out, the Knicks may consider trading the veteran in order to either A) add to the surplus of draft picks the Knicks already have, B) free up cap room, C) to allow some of the younger assets currently rostered further their development or D) package him in a deal for a splash trade acquisition. They have room to work with.

Pros of a trade:

Let’s start with the pros of a trade. Derrick Rose has seen limited action to begin this season, playing just over 12 MPG this season, including a season-low 9 minutes Monday night vs. the Orlando Magic. Immanuel Quickley’s counterpart has seen nearly double the action, averaging over 22 MPG. It is clear that Knicks head coach, Tom Thibodeau, is slowly shifting gears and starting to use Quickley more often, leaving Rose in the thick of things.

Taking up a roster spot while not playing valuable minutes and making $14.5 million is never an ideal situation for any organization to be in.

One of the most notable things about Quickley is his growth as a facilitator. Poised to improve in the playmaking department, he has recorded at least seven assists in his last two games and averaged 6.5 APG in the final 10 games of last season. He has appeared to be more in sync on the floor when tasked with ball-handling duties.

“Teams are playing me as a scorer, so I try to create for my teammates.”

Immanuel Quickley on his mindset as a playmaker

Trading Rose would ultimately allow Quickley to assume a much larger and more consistent role into the Knicks’ rotation, potentially as a 6th man, and not be subject to playing second fiddle to Rose on the bench. It will allow Quickley to further develop skills as a primary ball handler and scorer, as he would become the new leader of the second group.

It would also allow Quentin Grimes to play alongside Quickley and Reddish in the second unit, bulking up the defense exponentially and hastening the pace of play.

Cons of a trade:

Now onto the cons. Rose is viewed as a veteran leader on the Knicks. Being the oldest player on the team (34 years) as well as being a former MVP winner, the Knicks would lose that veteran leadership by letting him go.

Losing that presence will essentially force the Knicks to rely on their young core to get the job done without the help of a veteran with league experience like Rose. Also, given that Quickley is still a raw prospect in only his 3rd NBA season, a Rose trade could backfire if Quickley trends downwards from a production standpoint.

“He’s really vocal. Every time a team goes on a run, {Rose} is calming everybody down, talking. Just being a leader, vocal, talking.”

Along with the leadership aspect, trading away Rose would also cause the Knicks to lose a crafty playmaker and an improved shooter who can still score at a very solid level. Since coming back to the Knicks in February 2021, Rose has shot a superb 40.6% from 3-point range and has also averaged 4 APG in that span. Of course, his unfortunate injury history has caused him to lose a step of explosiveness, but he is still an effective NBA scorer nonetheless, who is sure to make an impact wherever he may go.

With many young players on the rise fast, the Knicks are left with a difficult decision to make regarding their beloved veteran. They will have to weigh all the pros and cons that surround moving him before making a final decision. Only time will tell if they make the right one.