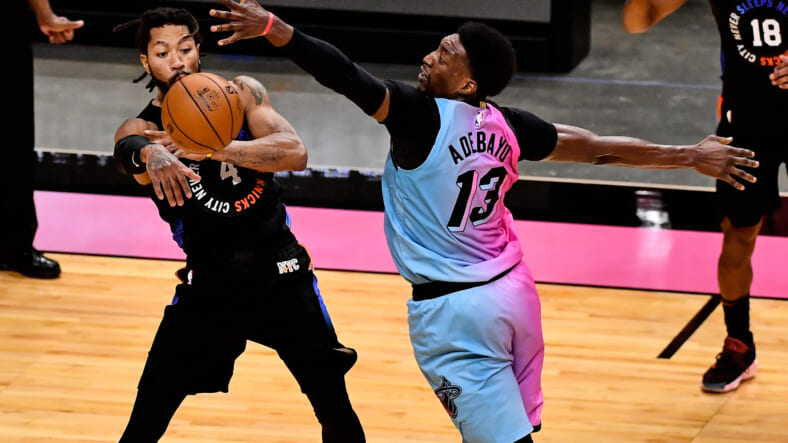 Derrick Rose badly wanted to be a Knick again.

“The last couple of days before the trade went down, we had a great conversation,” Casey said. “He was upfront and honest. ‘Coach, I’ve only got so many miles left in my legs. I just want to make sure I go to a situation where I may have a chance to make the playoffs this year. I know where you guys are—you’re rebuilding, you’re retooling.”

Casey, though, was perplexed at first with his destination of choice—the New York Knicks. But he understood the player-coach bond between Rose and Tom Thibodeau.

“And I said to Derrick, ‘you may have a chance here just as you may have in New York,'” Casey recalled with a chuckle.

“But I understand his relationship with Thibs. Thibs started him out as a rookie. That’s special. You never gonna change that. So, I’m happy for Derrick. I was glad we were able to accommodate him and find him a place where he could go and a place he wanted to go to play with Thibs,” Casey quickly added.

The Knicks have been a pleasant surprise in Thibodeau’s first year with the team. They currently sit at ninth place in the Eastern Conference with their 11-15 start.

Rose feels he can come in and help the Knicks reach the playoffs.

He wanted to be reunited with Thibodeau for the third time. But on top of that, he also desires to rewrite a bad chapter in his storied career.

His first stint with the Knicks in 2016 started on the wrong foot with off-court troubles stemming from rape allegations. Then it spiraled into his now-infamous AWOL. His short-lived stay in New York ended with his fourth knee surgery.

Rose went through hell but rose and fought his way back.

“I’m happy for him because he came here, again, a guy that we got from Minnesota. I gave him a couple of years to re-establish himself in the league as one of the top off-the-bench scorers and fit in like a glove and worked with me, accepting my coaching here with the guys. He’s been an MVP in the league. And his body went in a different way, but he continues to work and get his body in the right place,” Casey said.

With those knees keep on betraying him, Rose reinvented himself. He morphed into one of the productive NBA players off the bench.

In his first game back with the Knicks, Rose collected 14 points, one rebound, three assists, one steal, and a block in just 20 minutes off the bench. The Knicks lost a nail-biter, 98-96, to the Heat, but they hung with the reigning Eastern Conference champions, and they outscored them by six when Rose was on the floor.

“He’s gonna be a big plus for New York as they go forward and get to where they want to go like he did to us, and I’m happy for him,” Casey said.

Rose made an interesting choice. He shunned the odds-on favorites to make the playoffs and bet on himself and the Knicks.

Will the third time be the charm for Rose and Thibodeau? Will the Rose-Knicks love affair be sweeter the second time around?