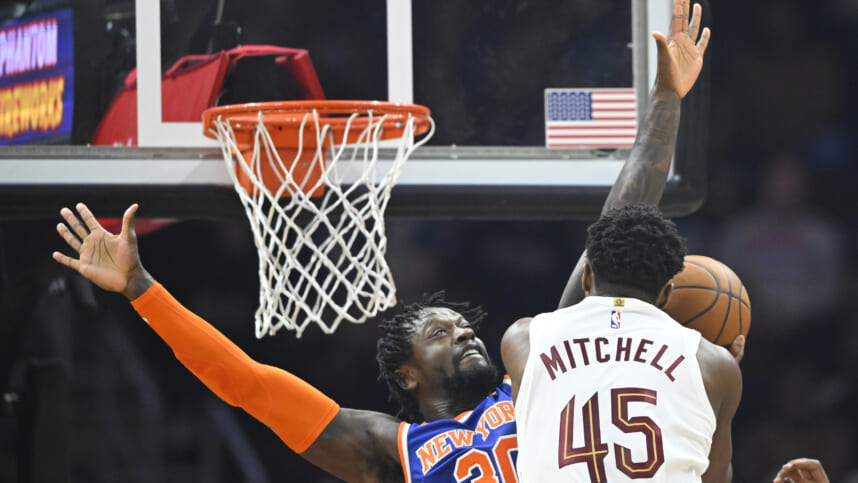 Donovan Mitchell reminded the New York Knicks why they should have gone all-in to get him.

Mitchell dominated the Knicks with a sensational 38-point, 12-assist performance just two nights after a 41-point explosion in Boston.

The Cleveland Cavaliers rode on Mitchell’s back and rained treys on the Knicks for a 121-108 win Sunday night in front of a sellout crowd at Rocket Mortgage FieldHouse.

It was the Knicks’ second straight loss and third overall against teams projected to be playoff contenders.

Mitchell was the type of All-Star player the Knicks could have used to get over the hump.

Instead, he punished them for not bringing him home.

Mitchell felt at home in Cleveland and played with a chip on his shoulder to prove the Knicks made a mistake. He waxed hot early with 15 points and five assists in the first eight minutes.

Mitchell’s red-hot start rubbed over the rest of the Cavaliers as they hit 23 three-pointers on a scorching 46 percent.

The Cavaliers outscored the Knicks, 37-15, in the fourth quarter as they quickly wiped out a nine-point deficit. Mitchell delivered the knockout punches with a 12-point barrage to put an exclamation point to his huge night.

After hitting one of his three-pointers in the fourth, he gave the Knicks bench a cold stare, perhaps to remind them what they were missing.

“I like the way we competed for the first three quarters. I thought we did a lot of good things. But we have to understand the intensity of the fourth quarter, and we have to do better and we will.”

New York overcame Cleveland’s hot start and took a nine-point lead early in the fourth quarter. But the Knicks starters returned to the game cold, while Mitchell and Love kicked the intensity to All-Star gear.

Love unloaded 16 points in the fourth quarter, with him and Mitchell hitting four-point plays at the height of the Cleveland run.

Jalen Brunson overcame a slow start to pace the Knicks with 16 points and seven assists. Evan Fournier also hit 16, while RJ Barrett and Julius Randle added 15 each. But the Knicks starters combined for only nine points on 4 of 12 shooting in the pivotal fourth quarter.

The Knicks will head home and continue their seven-game stretch against heavyweight teams. They will face their 2021 playoffs tormentor Trae Young and the Atlanta Hawks on Wednesday.