Could Cam Reddish continue to start for the Knicks when Quentin Grimes returns? 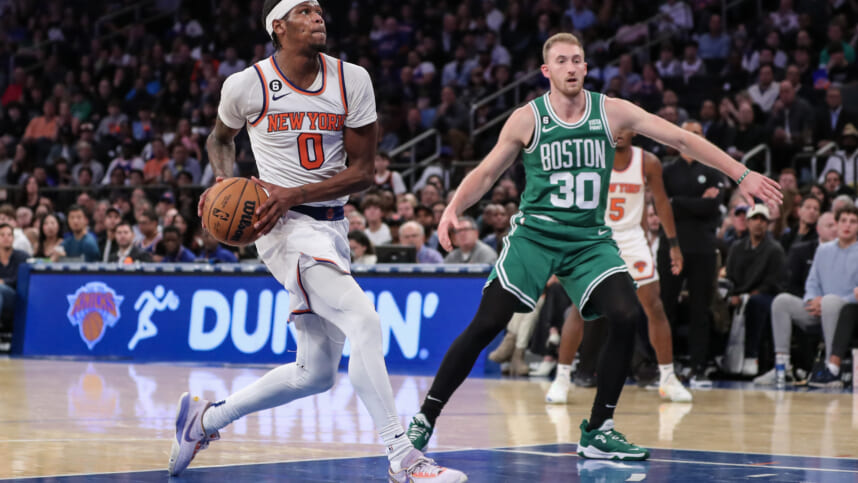 The New York Knicks have started Cam Reddish in their past two games while Quentin Grimes’s knee has been nagging him. The Knicks benched Evan Fournier and elevated Grimes to the starting role last week. Despite Grimes’ injury, Fournier remains on the bench, and Reddish is now in, signaling that head coach, Tom Thibodeau, is staying pat on his defense over offense scheme.

With Grimes still needing some reps in before receiving big minutes, the possibility arises that Thibodeau could stick to the former Duke prodigy in the starting five upon Grimes’ return to action.

Cam Reddish’s defensive impact could keep him as a starter

As previously mentioned, Tom Thibodeau appears to be valuing defense over offense with continuing not to go back to Fournier in the starting 5. Reddish has been a catalyst defensively for the Knicks through the early parts of the season thus far, posting a plus-minus of +2.4, a new career-high.

Reddish’s large frame at 6’7″, mixed with his agility and quick hands, allow Reddish to switch onto multiple players of different positions. He’s also done a solid job at cutting off drives to the basket with his 7’1″ wingspan.

Reddish’s fellow Knicks teammates see the impact he has on the team and know what he is capable of, and has gotten high praise from his old Duke teammate and leader of the Knicks, RJ Barrett.

Overall this season, Reddish is averaging 7.8 PPG while shooting 45.3% from the field and 40.7% from 3, which are both career highs. In the two games, he has started this season, he has struggled quite a bit from an offensive standpoint, as he is shooting just 3 for 14 in the two games combined.

However, all 3 of those field goals have been from beyond the arc, and given his improved efficiency from outside this season, it is safe to assume that with more shot volume and more time, he will begin to become more comfortable hitting shots other than 3s.

Reddish’s numbers are markedly better as a reserve this season, but that is also mainly because he is accustomed to that role. In 8 games off the bench this season, Reddish is averaging 8.3 PPG on incredibly efficient shooting numbers, 52% from the field and 40% from 3. He’s also tallied just seven total turnovers in that stretch.

It is also noteworthy that struggling from the field when transitioning roles is normal for most players. Bottom line, don’t panic about Reddish’s shooting numbers as a starter yet, as the sample size is too small to make a proper judgement. His bench numbers should be a telltale sign of what he could bring to the Knicks’ table offensively.

Cam Reddish has made some big leaps this season overall, hence why Tom Thibodeau gave him the opportunity to start amidst the injury adversity. Obviously, the efficiency from the field could be cleaned up a bit, but his defensive versatility works in his favor under Thibodeau’s high defensive mindset as a coach.

Reddish could get a 3rd starting opportunity in as many games when the Knicks take on Kevin Durant and the Brooklyn Nets on Wednesday night at the Barclays Center.