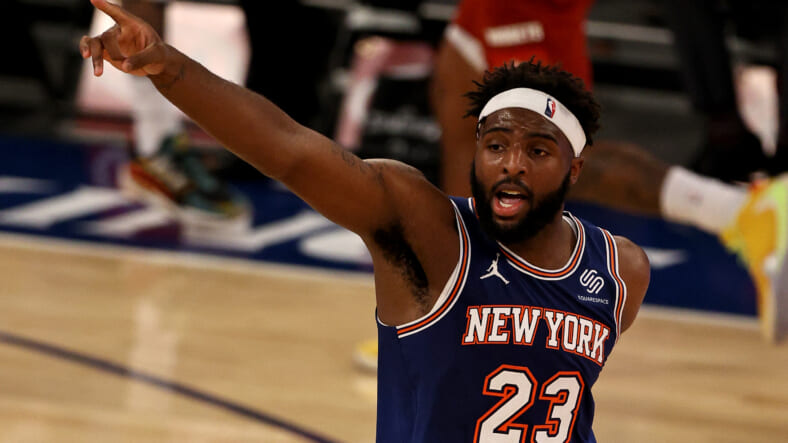 New York Knicks center Mitchell Robinson has bulked up in a serious bid to show heâ€™s ready for a bounce-back season that should be worthy of a huge investment.

With his contract extension looming on the horizon, Robinson reported back to New York ahead of the training camp bigger and stronger.

â€œMitch looks good, man. Mitch is brolic; heâ€™s big,â€ Randle said in an interview with Ian Begley of SNY. â€œYou can tell that he took the weight room seriously.â€

Robinson revealed in a now-deleted tweet heâ€™s currently weighing 280 pounds, a 30-pound increase from last year when he reported to training camp at 250 pounds. The former second-round pick has now amassed close to 60 pounds since entering the NBA on a lean 223-lb frame in 2018.

The Knicks sorely missed Robinson in their first-round playoff loss to the Atlanta Hawks.

Clint Capela, who is listed modestly at 240 pounds, threw his weight around the Knicksâ€™ decimated frontline. Nerlens Noel and Taj Gibson tried their best, but they were overmatched down low. Capela wreaked havoc with a constant double-double game (13.4 points, 10 rebounds, and 2.2 blocks) as a roll man and a lob threat — a perfect match to Trae Youngâ€™s backcourt wizardry.

Randle is optimistic of their chances this coming season with a healthy and ripped Robinson.

â€œSo Mitch looks good, and heâ€™s one of those pieces that people donâ€™t even really know that we had last year because he missed so much time. So heâ€™s going to be a huge factor for us coming into this year, for sure,â€ Randle said.

Robinson has set his eyes on the Defensive Player of the Year award. But with Noel back on a three-year deal (team option on the final year), Robinson has competition for the starting spot again.

The jury is still out on Robinson after a long layoff, but he is bound to get better with healthy competition internally. And throw in the added motivation that heâ€™s playing for his next contract, expect the 23-year old center to go all out from the get-go.

Due to earn $1.8 million this season, a relative bargain compared to his peers, Robinson is out to prove heâ€™s also worthy of heavy financial investment.

This summer, he watched Boston Celticsâ€™ young center Robert Williams bagged a $54-million, four-year contract extension. Capela locked for two additional seasons with the Hawks to the tune of $46 million.

Robinson is eligible for a contract extension worth up to $51 million in four years. But the Knicks are on a wait-and-see mode.Â And their young but bold center is eager to flex his muscle and show what heâ€™s been working on this summer.