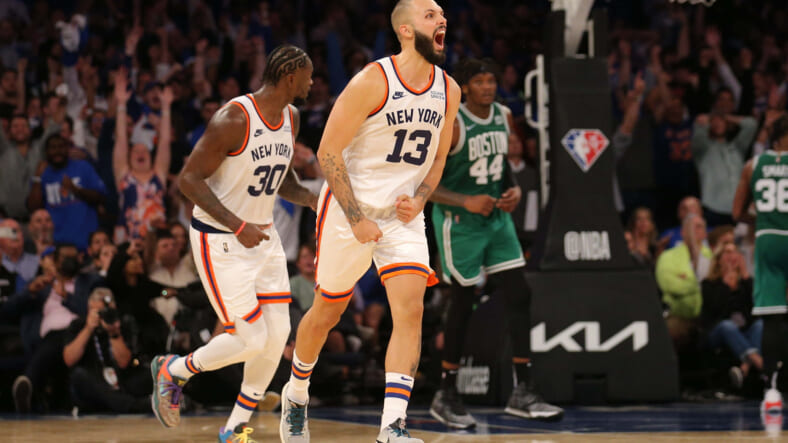 When reporters asked Julius Randle what to expect in the New York Knicks season opener, there was something compellingly prescient about his answer.

A chaotic final sequence in the regulation nearly cost them the game, but the Knicks regrouped and leaned on their preseason experience to pull off a 138-134 double-overtime win over old rival Boston Celtics on Wednesday night.

It was the first season opener with multiple overtimes since the Knicksâ€™ 118-117 triple-overtime win over the Grizzlies on Nov. 1, 2006.

“Every time before we go out [of the locker room], coach [Tom Thibodeau] always puts on the board, ‘find a way to win.’ They talk about us taking preseason seriously, but this is why we take it seriously so we can win games like this,” Randle said.

Their undefeated run in the preseason kept them sharp and mentally ready for a brutal opening game that needed 58 minutes of basketball to decide the winner.

Randle started the season proving that his All-NBA season was not a fluke. In a battle of All-Star forwards, Randle answered Jaylen Brown’s 46-point performance with a near triple-double (35 points, eight rebounds, nine assists, three blocks in 46 minutes) and clutch free throws in the second overtime. Randle became the first player in Knicks’ history to log in at least 25 points, five rebounds, and five assists in multiple season openers, per ESPN Stats and Info.

Derrick Rose showed that he can still close games more than a decade removed from his MVP season. He kept fighting through his shooting woes to hit the dagger — a floating banked shot off Dennis Schroder with 22.2 seconds left for the final tally. He wound up with nine points on 3-of-11 shooting and five assists.

It was a massive win against a conference rival that is projected to finish ahead of them in the standings.

But the Knicks had to earn it the hard way after blowing an 11-point lead late in the fourth quarter. They failed to protect a three-point cushion with 4.8 seconds left in the regulation when they seemingly forgot to foul.

“There was a slip but we did want to foul,” Thibodeau later said. “We got to work on it. We’ll learn from it.”

A Jayson Tatum slip caused a chain of reactions, leading to a wide-open Marcus Smart three-pointer that beat the buzzer to force the first overtime. Fournier went to double team Tatum that left Schroder open for the pass. Schroder found Smart as Kemba Walker, who had two costly turnovers inside the final 30 seconds, scrambled for defense.

Fournier atoned for his blunder with four triples in the two extra periods. After an underwhelming preseason, Fournier found his rhythm in his official Knicks debut. He shot 13-of-25 overall and accounted for six of the team’s 17 three-pointers.

The Knicks attempted 45 three-pointers, 34 in the regulation.

“Iâ€™ve never worried about him making shots,” Thibodeau said referring to Fournier. “To me, he’s proven throughout his career that’s who he is. It’s nice to see him and Julius build some chemistry together.”

The same cannot be said of Walker, who has yet to make his signature Knicks moment through four games dating back to the preseason. In this game billed as his official homecoming debut, Walker hardly had an impact with 10 points on 3-of-8 shooting in 36 minutes. He had more turnovers (4) than assists (3) and watched on the bench in the second overtime.

“I think [with] Kemba, the more he plays with that group the more he gets into a rhythm,” Thibodeau said. “He’s got great instincts in the pick and roll. And I think we can take advantage of that even more than what we’re doing right now. So, we’ll continue to work on that.”

“Kemba and Evan are two terrific players. We’re excited about the possibilities.”

However, their performance in the first 28 minutes did not elicit excitement. The Knicks trailed by as many as 12 points. After a roaring 8-0 start buoyed by a couple of Randle’s three-pointers, New York fell into Boston’s trap.

They could not solve the Celtics’ switching defense that held them to only eight assists in the first half and forced them to rely on isolation plays. Jaylen Brown’s 25-point outburst in the first half, 20 in the opening quarter, compounded their problem.

Not until Thibodeau switched to his small-ball lineup again in the third quarter that they found an answer. Sans Nerlens Noel (sore left knee) and Taj Gibson, who just became a first-time father, Thibodeau leaned on the Toppin-Randle frontcourt to ignite their comeback.

After Toppin replaced Mitchell Robinson with 8:36 left in the third quarter, the Knicks outscored the Celtics, 28-15, to seize an 86-82 lead heading into the fourth quarter.

They pushed the pace, and the space they created gave Barrett enough room to operate. After a scoreless first half, Barrett uncorked 14 of his 19 points during that big run.

“It got us going. It got us into the open floor which was good. That group really played well together,” Thibodeau said.

A Schroder three-pointer cut Celtics’ deficit down to six. But Toppin’s alley-oop dunk over Payton Pritchard restored an eight-point Knicks’ lead, 100-92, with 8:58 left in the regulation.

The second-year pro looked every inch the lottery pick that he was hyped to be as he finally spread his wings. Toppin finished with a career-high 14 points in 28 minutes, the most he’s played since he entered the NBA. He added five rebounds and one block.

His breakthrough performance was a testament to Thibodeauâ€™s player development acumen and his body of work with his trainer David Zenon in the summer.

Robinson delivered a monster double-double in just his second game back from a foot injury. The 23-year old center collected 11 points, 17 rebounds, three assists, and two blocks against only two fouls in 35 minutes.

“I think we’re seeing just the tip of the iceberg with Mitch. I think Mitch is gonna be really, really good for us,” Thibodeau said. “RJ, in the second half, he was a monster. The thing that I liked was he kept his composure. He wasn’t rattled and just kept playing. He kept working in the game and then the game got going his way. So, it was really good to see.”

More than his offensive contribution, Barrett held his end of the bargain on the defensive end. He played a major role in slowing down Tatum, who bled for 20 points on 7-of-30 shooting, including 2 for 15 from downtown.

After a chaotic first half, the Knicks’ offense flowed like the Hudson river in the last two quarters and two overtimes with 19 assists.

Amid the chaos that reigned in the Garden in their season opener, the Knicks found harmony in their continuity, stability, and flexibility.

Itâ€™s going to be a long season. But the Knicks are equipped to battle chaos.