Who are the top five New York Jets through five games? 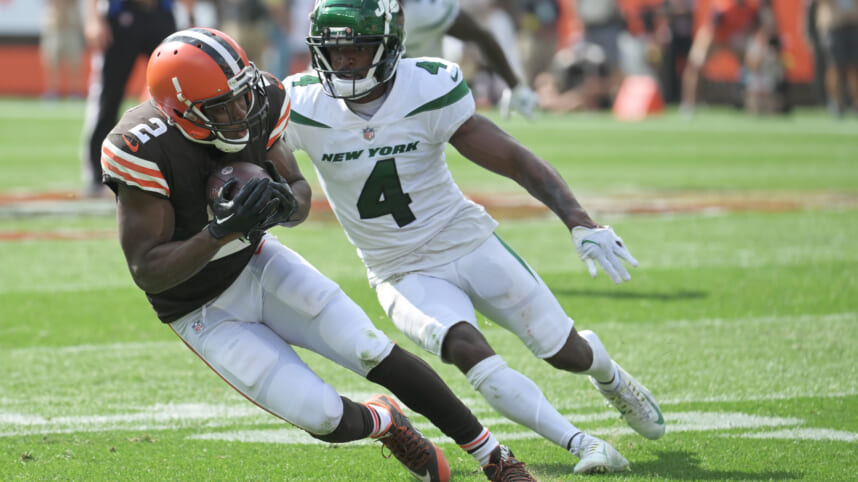 We are now more than a quarter of the way through the 2022 New York Jets season. Through five games, some Jet players have stood out and played at a high level.

The infused talent across the roster following two strong offseasons makes power ranking the top players on the team a fun challenge.

More importantly, having elite players playing at the top of their position from a league-wide standpoint is what is as encouraging as anything with this current Jets team. It has been a while since the Jets could say that.

Without further ado, let’s take a look at the best five Jets through the first five games of 2022.

Getting this top five started was a tough call. Between three players, DJ Reed, John Franklin-Myers, and Carl Lawson, it was hard to decide here. Ultimately, the two defensive linemen in Lawson and Franklin-Myers are honorable mentions. Before highlighting Reed, Lawson has heated up as of late with two sacks and nine quarterback hits over just the last two games. Franklin-Myers has half a sack, and six quarterback hits so far.

Reed has been awesome for the Jets at cornerback since Week 1. He has an interception and two passes defended. Reed has the fourth-lowest QB rating (34.6) of all corners with at least 20 targets this year. He contributed to the Jets, limiting the duo of Tyreek Hill and Jaylen Waddle to 70 yards in Week 5. Reed has been a consistent key to the Jets’ 10th-ranked pass defense in all five games.

The other top-flight cornerback acquired by the Jets in the busy offseason. Sauce Gardner has made a big, immediate impact on the Jets’ defense. Together, he and Reed have formed one of the top corner duos in football. Gardner has six passes defended, at least one in all five games. He got on the board with his first career interception this last Sunday.

He has not backed down from any challenge. Whether it be the speed of Hill and Waddle, the quick route runners like Amari Cooper and Diontae Johnson, the size and physicality of Ja’Marr Chase, or even matching up with a premier tight end in Mark Andrews, Gardner has exhibited confidence and delivered. He is already being regarded as one of the best cornerbacks in the NFL. Gardner has a long, special career with the Jets in front of him.

The Jets’ second-round rookie has provided tons of excitement to the Jets’ offense. Hall has 488 yards from scrimmage and three total touchdowns through the first five games. He is coming off a game in which he had 197 all-purpose yards.

Hall offers a complete, dynamic skill set. Hall’s combination of size and speed, his patience, vision, and one-cut ability as a runner, along with contact balance and natural receiving ability, have all been on display. The first-year running back is currently on pace for 1,659 scrimmage yards. The Jets have gotten significant rewards in no time from their thrilling 2022 draft class.

Along with sorting out the fifth-ranked player, the other challenge was determining who should be one and two between Quinnen Williams and Alijah Vera-Tucker. Ultimately, with Vera-Tucker’s ridiculous versatility, Williams places second. He has been more than worthy of being mentioned as the Jets’ best player to date this year, however.

Williams has three sacks, with at least a half-sack in four of five games. He also has eight quarterback hits and two tackles for loss. Williams is on pace for a 10-sack season, his first, as well as 27 quarterback hits. Williams’ career-best to date is 14 quarterback hits. He is having a career breakout year in his fourth season, playing both the run and pass at a dominant rate.

The positional flexibility that Vera-Tucker has offered the Jets is something special. He had to move from left guard to right guard this offseason which dating back to his redshirt sophomore year at USC in 2019, was already four consecutive years of playing at a new position. Well, now, he has played three positions in three weeks for the Jets.

After making his first three starts of the year at right guard, Vera-Tucker has moved to left tackle and then to right tackle. And he has not missed a beat. Vera-Tucker has not committed a penalty and has allowed just one sack this year. He is a force for the Jets’ running game. At 23 years old in year two, Vera-Tucker has provided the Jets with immense value.