The state of the New York Jets disheveled offensive line 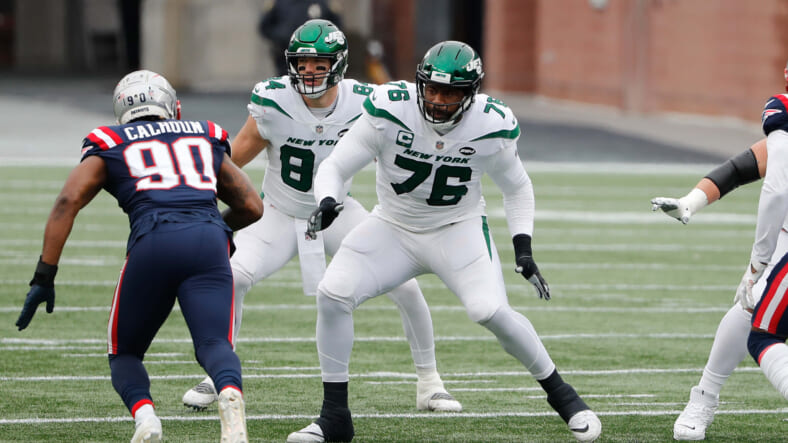 The moral of the story when it comes to the 2022 New York Jets offensive line has remained the same for months, unstable. As a result of a slew of injuries since early in training camp up until this last week, the front five for the Jets’ offense has been a constant unknown.

It started with Mekhi Becton early on in camp this summer. Then, right before the start of the regular season, Duane Brown sustained an injury. After Week 3, George Fant had to go on IR for at least four weeks. The following week, it was Max Mitchell for four games as well. Finally, after making two position changes, Alijah Vera-Tucker suffered a season-ending injury.

In total, all of the top five offensive tackles have missed time in just the first seven games of the season. This upcoming week, it will be the Jets’ fourth different group of starting offensive linemen in just eight games.

Continuity has been far from a thing for the Jets, as the five have not remained the same for four games in a row.

Reviewing the current state of the New York Jets OL:

The two players who have been consistently available week-to-week are center Connor McGovern and left guard Laken Tomlinson. Both players have played 100% of the Jets’ snaps this year.

From there, the other three positions have been a revolving door. Both tackle positions will have now featured three different starters come this Sunday. Brown has done a great job at left tackle and deserves all the credit for battling through his shoulder injury for this team. At right tackle, without Fant, Mitchell, and Vera-Tucker, this week it will be a former first-round pick, Cedric Ogbuehi.

Finally, at right guard, a manageable two different starters have had to play. Vera-Tucker made the move to the position in the offseason. After he needed to move yet again to both tackle positions within two weeks, Nate Herbig had to step in at right tackle. He has done well.

This week, from left to right tackle, the group will look like this. Brown, Tomlinson, McGovern, Herbig, and Ogbuehi. The only two backups at the moment are tackle Mike Remmers and interior G/C, Dan Feeney.

As mentioned in the introduction, both Fant and Mitchell are able to return imminently from injured reserve. Starting with Mitchell, he is eligible to make his return next week. If not, with the bye the following week, he should make a return after the week off. Then, with Fant, he was able to come off of it this week, but Robert Saleh indicated earlier in the week that seemed unlikely. The concern with some recent reports has become, will Fant be able to return this year?

He was placed on injured reserve following Week 3 with a knee injury. It is worth noting that Fant also had knee surgery in January earlier this year. It kept him limited throughout the offseason program. At this point in time, the Jets could certainly use Fant, and the hope has to be that he continues to make progress.

If that ends up not being the case for Fant, even when Mitchell returns, offensive tackle depth could be a major question as the Jets progress through this season.

Saleh did just make known in his press conference that Fant is week-to-week and that he is hopeful for a return after the bye.

Will Joe Douglas strike with another trade?

As a result of all the offensive line injuries, the recent buzz surrounding the Jets on the trade front, with the deadline looming has been about the offensive tackle position.

Two big names in, Laremy Tunsil and Jack Conklin, have been floated around. However, both ultimately seem unlikely. Taylor Moton is another right tackle who has been brought up. But the Jets will probably not be able to acquire him with both his contract and trade value being too steep.

One player mentioned who could make more sense is Andre Dillard from the Philadelphia Eagles. The connection is logical because Joe Douglas was still in Philadelphia before joining the Jets when the Eagles drafted Dillard in the first round.

In four years with the Eagles, Dillard has started just nine games. The reason his name has been brought up in trade talks is due to his current backup role and the fact he will be a free agent next year.

Knowing his contract is up likely makes the assets the Jets would have to part ways with to acquire Dillard less.

Dillard recently turned 27. If Fant returns, adding Dillard is not as vital for the Jets. On the other hand, if Fant’s return prolongs, it would be ideal for Douglas to add depth behind Mitchell with someone like Dillard.

One final player worth monitoring is Riley Reiff. On a 3-4 Chicago Bears team and set for free agency after the year, he could potentially be had. The Jets did bring in Reiff for a visit themselves early in the summer.

What goes a long way for the Jets here is a healthy Fant. If so, a starting five of Brown, Tomlinson, McGovern, Herbig, and Fant with Mitchell as a swing tackle gives the Jets a more than quality group capable of getting the job done, despite many injuries. It Mitchell has to step in and start for Fant, making a move for a third tackle would be wise.

Joe Douglas has done a terrific job rounding out the depth of this crucial position group. Now, we will see what happens on the trade front, as well as with Fant and Mitchell, over the next week or two.