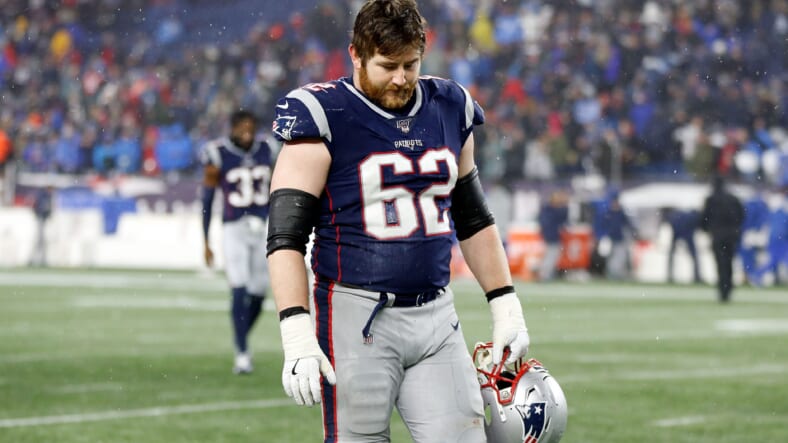 Heading into last offseason, one of the hottest commodities projected to hit the market was two-time Super Bowl champion and all-pro offensive guard Joe Thuney. The New York Jets and Miami Dolphins were reportedly set to back up the brinks truck to Thuney in hopes he would anchor his offensive line. Then, the Patriots threw a wrench in those plans by tagging Thuney. Now, Thuney will reportedly be allowed to seek a new home this offseason. With Mekhi Becton as the solidified anchor of the offensive line at left tackle, here is why Joe Thuney can give the Jets one of the best tackle/guard combos in football.

Who is Joe Thuney?

Joe Thuney grew up in Ohio and was one of four children. Thuney was not a stranger to success early in life, he was a member of two state championship football teams, he was named offensive lineman of the year in the Greater Catholic League, and was class president in his senior year of high school. Thuney was well-liked on and off the gridiron, and this led to an opportunity to play at NC State. At NC State, Thuney played all over the offensive line taking snaps at center, both tackle spots, and guard during his time with the program. Thuney graduated NC State in three years and received All American honors.

After a successful beginning to his football career, Thuney was selected with the 78th pick in the 2016 NFL Draft by the New England Patriots. In five seasons, Thuney has played every single game, not only that, but he has been a team-first guy being adaptable this past season and making the switch to tackle with Marcus Cannon opting out and creating a void. Thuney has been both a depiction of stability and success, winning two rings during his tenure with the Pats.

Thuney will command a monster deal this offseason. As one of the most reliable and consistent linemen in the game, he will be paid as such. Now, Joe Douglas has been rather set in his evaluations of certain players in the past, but offensive linemen have been his most focused entity in his brief tenure as general manager to this point. The potential of having two beasts on the offensive line for the long-term future in Thuney and Becton is something the well-traveled exec may not be able to pass up. Not only that, but as we saw just a few weeks ago with Patrick Mahomes, if you donâ€™t have protection, the entire rhythm of the game plan is thrown out the window.

On a relatively young team, Thuney would slot in as a leader and building block for the future. We are talking about a durable, smart, and versatile piece that fits the mold of everything Douglas seems to look for in the guys he wants to fill out his roster with. Add all that into the fact that he is successful no matter the stop. Thuney could be used anywhere on the line, but the idea of Becton and Thuney anchoring the left side could be too much to pass up. No matter where you put him on the line, Thuney would be a massive addition to the team and someone the Jets should not let slip away.