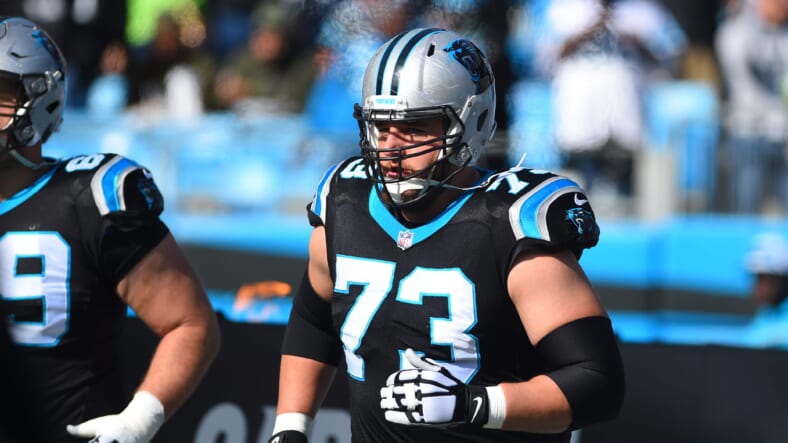 What Does Van Roten Bring?

Greg Van Roten is a 30-year-old guard who will now likely become the Jets’ newest starter. He can also swing out and play tackle if need be, which provides more flexibility on the line. Van Roten will be receiving a three year deal with money not yet known.

Van Roten is a superb run blocker and pass protector. Heâ€™s only allowed three sacks and 5 QB hits in the past two years. Heâ€™s also been flagged once in 5 years. Van Roten has taken over as a starter in Carolina and not looked back. Van Roten immediately establishes the interior with Alex Lewis and Connor McGovern and makes it a much-improved one.

The Jets would still have room to grab an interior lineman on day 2 or 3, but it is no longer a necessity. Presumably, the Jets will aim to grab a rookie to compete with Lewis at the guard spot, along with the tackle theyâ€™ll likely grab at 11.

The Jets offensive line has been massively upgraded by Douglas in free agency, and adding a long time Jet fan and solid offensive lineman in Van Roten has furthered that.

Now with all the offensive line additions, this makes longtime Jet Brian Winters expendable. Winters will likely be cut now and could find a market elsewhere.

The Jets now legitimately turn their attention to other areas. They could add a tackle, but they may focus on that more in the draft with pick 11. As for now, the Jets will likely continue to wait out the decision from Robby Anderson. If he doesnâ€™t return, expect the Jets to move quickly to fill the speed receiver slot he will leave.

The Jets will also have to aim towards adding another outside corner. Prince Amukamara has been linked to the Jets a lot and could be a good fit to pair with a pick, Bless Austin and Brian Poole. The Jets also need to target an edge rusher or two. Lastly, the Jets should target a backup QB to upgrade over Siemian in case Darnold gets hurt or mono again. Douglas achieved his first goal and did a damn good job of it with the offensive line.Â