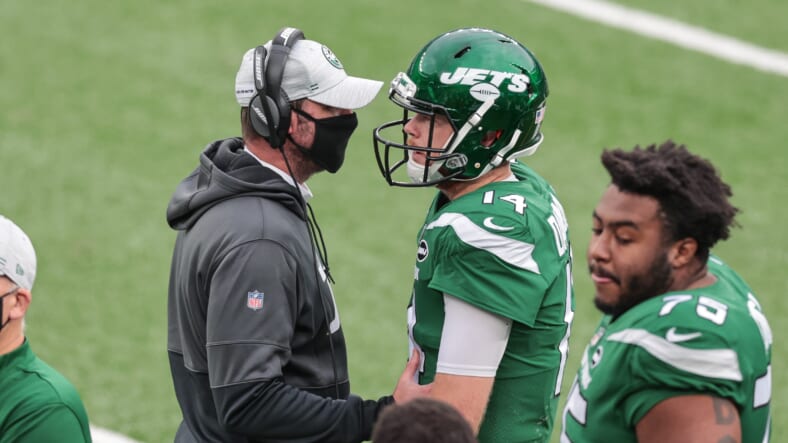 As the Sam Darnold era ends, a lingering question will haunt New York Jets fans as he prepares to move to Charlotte.

With respect to the countless devotees of movies, books, television shows, etc., across the world, no one writes more fan fiction than football fans. Rather than “Once upon a time…”, football fables often begin with a question: “What if…?”.

The question is endlessly asked before, during, and after every NFL season. What if that star prospect falls? What if they went for it on fourth down? What if that quarterback retires?

What if the New York Jets hired someone…anyone…other than Adam Gase to oversee Sam Darnold’s developmental years as head coach?

It’s a question whose answers reside months, even years, away. Both Gase and Darnold are now distant memories in the New York archives, the former fired and the latter bound for Charlotte in a trade with the Carolina Panthers. The Jets only have numbers to show for it in the immediate aftermath. Dealing Darnold netted them the 226th overall pick in the coming draft, as well as a second and fourth-round choice in the spring of 2022.

In the immediate aftermath, it’s easy to call the Jets’ Darnold deal with Carolina a win for both sides on paper. Darnold gains welcome stability in Carolina (reuniting with fellow ex-Jet Robby Anderson and working with All-Pro rusher Christian McCaffrey) while the Jets make some fine additions to their draft collection. But the Jets will forever look back on their Darnold with a sense of regret and what might’ve been. The chorus of “what if” echoes as the countdown to what’ll likely be the beginning of the Zach Wilson or Justin Fields era.

It starts with the hiring of Gase, a supposed offensive guru brought in to oversee Darnold’s vital post-rookie campaigns. Todd Bowles’ tenure had undoubtedly run its course, but its final stages were full of hope through Darnold’s final four games. It was a stretch that saw Darnold earn a come-from-behind victory in Buffalo (topping fellow 2018 draftee Josh Allen in their first meeting) and go head-to-head and blow-for-blow with Deshaun Watson and Aaron Rodgers in consecutive weeks. The latter tilt, a Festivus showdown with the Green Bay Packers, was an overtime thriller that saw Darnold earn career-bests in passer rating (128.4) and passing yardage (341).

When Bowles was let go, the Jets needed someone with a strong developmental mind, someone who could nurture Darnold’s potential and build on the promise shown over the final stretch. CEO/Chairman Christopher Johnson knew just how vital the search would be when he spoke after dismissing the current defensive coordinator of the defending champion Tampa Bay Buccaneers.

“I think the Jets are a really good spot for a coach to end up,” Johnson said at the time. “So I think that we have a competitive advantage there. But weâ€™re not going to sit down and wait for people to come to us, weâ€™re going to search hard and fast. We want to get this done.â€

It got done through the arrival of Gase, fresh off three years of Miami mediocrity. From the get-go, there probably should’ve been something off about the new boss, one who never truly fostered a young quarterback. Peyton Manning put the best numbers of his career under Gase, but the most adamant football denier could probably oversee an offense with Peyton Manning and still average 21 points a game.

Gase helped get the Chicago Bears’ offense back on track as coordinator in 2015, but Jay Cutler, despite a career-best passer rating, was in his 11th season and headed toward his polarizing career’s final stanzas. Even if Gase’s work with Cutler counted for something, it was more or less undone when the pair reunited for a fruitless season in South Beach two years later. In terms of youth, Ryan Tannehill endured what seemed like an endless stream of “make-or-break” campaigns before being mercifully shipped to Tennessee after Gase’s Floridan ousting. By now, little more needs to be written about Tannehill’s success sans Gase.

Yet, the Jets insisted Gase was their man, sticking with him after a dreadful 0-4 start. After his infamous bout with mononucleosis…a happening only amplified by social media schadenfreude that amplifies the Jets’ simplest errors…Darnold helped right to ship to the tune of a 7-9 ledger. Further fleeting flashes of brilliance emerged, such as Darnold’s return from illness, a 338-yard, two-score showing in a triumph over Dallas, the Jets’ first win of the year. Further silliness came through Darnold’s failed Ghostbusters tenure, but to have him post a winning record (7-6) despite endless silliness surrounding him was a promising sign.

But seeds for a destructive 2020 season…for reasons far beyond limitations set up by the ongoing health crisis…were starting to take root. Anderson, Darnold’s favorite target during his opening years, absconded for Carolina after “(losing) his love of football“. Every week, it felt like Gase had to ensure the public that he wasn’t dealing with a full-on mutiny.

As the season moved on, the Jets continuously eschewed the notion of firing Gase in-season. Johnson even broke out the guru comparisons after a listless opening day loss in Buffalo by calling Gase “a brilliant offensive mind” after the Jets pulled off the statistical anomaly of earning under 300 yards in Orchard Park. The sub-300 tally, in fact, occurred 11 times during the 2020 campaign…a downright jaw-dropping occurrence in an NFL that worships offense.

All the while, the Jets gave up on several accomplished names before deciding Gase was expendable. A mini-fire sale ensued that saw accomplished defenders Steve McLendon, Avery Williamson, and Pierre Desir sent away. Le’Veon Bell, a constant co-combatant in Gase headlines, was outright released while the eyes of the nation were centered on a rare Tuesday night game.

Darnold sank further into oblivion, forced into situations that even the greatest, most established quarterbacks would have trouble salvaging. One couldn’t even argue that the Jets were showing promise in these losses. All but one of their first eight defeats came by multiple possessions, exacerbated by the struggle to gain yardage. Unlike their blue MetLife Stadium co-tenants (the Giants losing five of their first eight in single possession games), there was nothing to get excited for from a Jets perspective.

For the record, it’s not only the Gase hire that Darnold had to put up with. His rookie season was spent behind an offensive built through the negligence of the Mike Maccagnan era. When the 2020 season kicked off, Darnold had only a single receiver left from his rookie campaign (tight end Chris Herndon, who has struggled to maintain rookie momentum) and his offensive line had undergone yet another makeover. The fact such flashes of brilliance were achieved despite playing in the far reaches of the football netherworld perhaps says something about Darnold, who has a prime opportunity to put his career back on track in Charlotte.

It could’ve happened in New York. The offensive line still needs work, but the Jets upgraded their weaponry this offseason, bringing in capable targets (Corey Davis, Keelan Cole) that can compete with returnees (Jamison Crowder, Denzel Mims) for top receiving honors. A multi-faceted rushing talent like Tevin Coleman can take some of the pressure off of whoever the quarterback will be.

But the Jets are trying to pen their own redemption story. They don’t have the time to co-author someone else’s.

In short, the Gase era left the Jets no other choice. His firing brought in a new regime, one praised not by the hot take artists but by players themselves, both domestically and abroad. For Robert Saleh to fully implement his vision and the Jets holding the ever valuable second overall pick of the NFL draft…the original of aerial franchise saviors like Donovan McNabb and Roman Gabriel…Darnold simply had to go.

Still, that won’t stop the eternal discussions, the fabled chapters that Jets fans will write for months before a single down is played and in the years after that, both supporting what Darnold could’ve done and celebrating his release.

The question will still be asked…what if?