One New York Jets coach could be a rising star 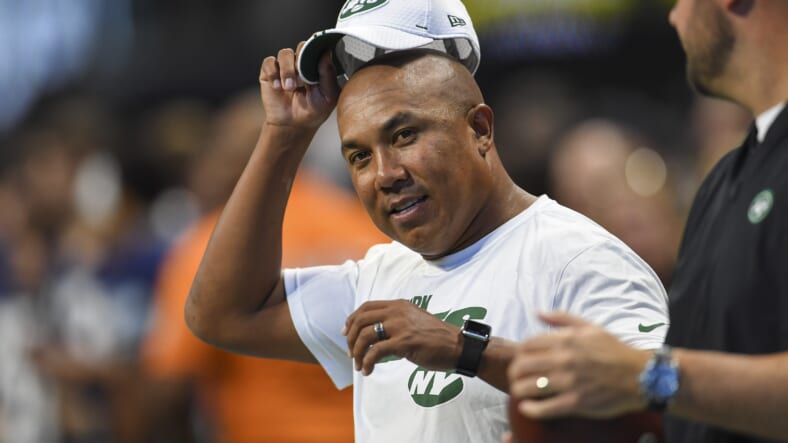 A rising star on the coaching staff for the New York Jets:

Let me take you back to 2006. The Pittsburgh Steelers played the Seattle Seahawks for the Lombardi Trophy. The MVP recipient in that win, the epitome of what it meant to be a Steeler, and the legendary receiver Hines Ward, was a key piece in that Super Bowl run and the victory.

He was clutch and displayed leadership on and off the field. Now, Hines Ward is on a different sideline. At 44, Hines Ward has traded his Yellow and Black for Green and White, and as he enters his second season coaching, the Super Bowl champion has already been labeled a rising star.

Hines Ward was brought in as an offensive assistant, but his role was more than that. Ward worked with many of the receivers on the team but was also named a key player in the development of Robby Andersonâ€™s route tree this past season. When the Jets beat the Steelers in Week 16, the Jets’ celebration centered around Hines Ward.

The team rallied around Hines and his impact was apparent at that moment. As Joe Douglas has preached building, â€œOne of the best cultures in sports,” Hines Ward is a culture changer. Coming from a winning organization, Ward is the guy these players can look to for advice on how to get to a championship-caliber level. Changing a culture from losing to winning isnâ€™t easy, but having guys like Ward around can make the transition much more feasible.

As I just hit on, Ward can play a part in being a culture changer, heâ€™s a leader and an educated offensive mind. This offseason, despite limited experience coaching, he was reportedly considered for several WR Coach opportunities.

Ultimately, Hines Ward has remained with the Jets, but if execs have taken note of what he did in year one, his reputation as a coach will only begin to preside his reputation on the field. Ward will only continue to grow into his role and excel. With more opportunities likely in his future, donâ€™t be surprised to see the former NFL super-star receive a promotion within the organization or elsewhere in the next year or so. The Jets should take note of his talent and groom him. Who knows, the former talent on the field could end up being even better off it.Â