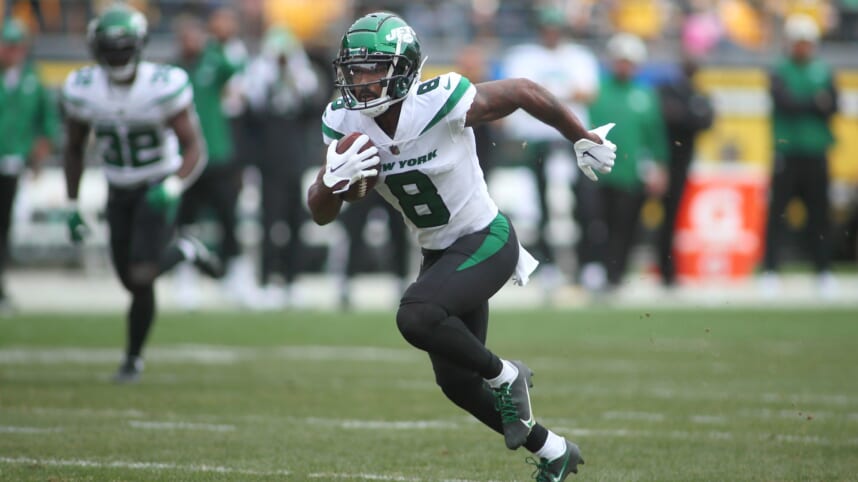 Despite being on a three-game winning streak and on the most relevant New York Jets team in years, one particular player is still not happy.

After taking a personal day, which had everything to do with a lack of involvement in a run-heavy offense, second-year wide receiver Elijah Moore has requested a trade. He reportedly met with and spoke to both offensive coordinator Mike LaFleur and head coach Robert Saleh today. The team was supposedly not too thrilled with the wide receiver’s attitude in the meeting.

The Jets drafted Moore just a year ago, early in the second round.

How should the Jets approach, what will likely happen:

With Moore’s trade request, which follows many signals weeks back of him showing frustration with a lack of targets, they should look to part ways. Unfortunately, with his lack of production and now making his complaints vocal, the value the Jets can get in return is unknown.

If the Jets feel they do get good value, a trade should come to fruition.

However, Joe Douglas has shown he will not take anything less than what he feels adds up.

Therefore, if the Jets cannot move Moore, he should remain inactive, which will likely be the case this week with him not practicing today.

It is undoubtedly disappointing that things escalated so fast, but Moore has shown us who he truly is. Being so disgruntled on a winning team does not match up with any championship culture.

More information on the situation will be provided by Saleh when he meets with the media tomorrow.