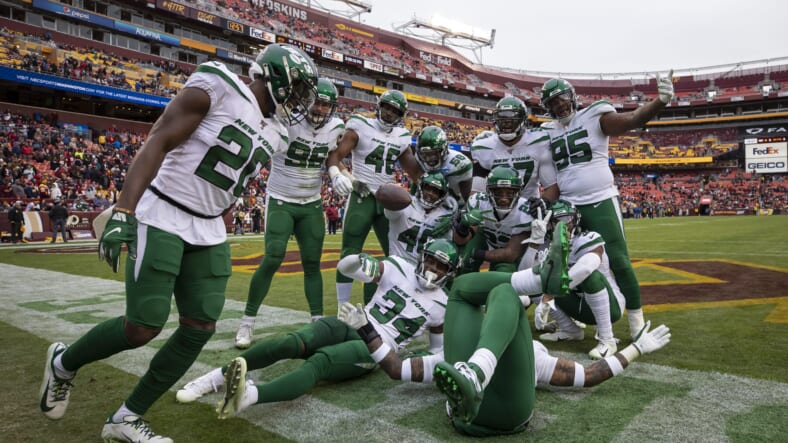 LANDOVER, MD - NOVEMBER 17: Neville Hewitt #46 of the New York Jets celebrates with teammates after intercepting a pass against the Washington Redskins during the second half at FedExField on November 17, 2019 in Landover, Maryland. (Photo by Scott Taetsch/Getty Images)

The New York Jets lost their best receiver this week to Carolina. With Anderson gone, the Jets brought in Breshard Perriman on a one year deal. With him on a prove-it deal, Quincy Enunwa with injury question marks galore and Jamison Crowder best suited in the slot, the Jets need to add to their receiving corps in the draft.

The Jets have pick 11. Iâ€™m a firm believer that they should take and offensive lineman with that pick. If they went receiver though, itâ€™s between 3 guys. Jerry Jeudy, CeeDee Lamb, and Henry Ruggs are the top 3 guys in this LOADED class.

Jeudy stands out to me above the other two. Jeudy is versatile and can play in a lot or on the outside. Jeudy is one of the crispest route runners Iâ€™ve ever seen and heâ€™s a future number 1 receiver.

Lamb is a deep threat who can high point the ball like nobodyâ€™s business heâ€™d fit Sam Darnoldâ€™s play style the best of the three and would give him that deep threat he had in Anderson and then some.

Ruggs is the most electric of the 3. He lit up the 40-yard dash and has flashed his in-game speed as well. If he developed as a route runner heâ€™d have the most upside of the 3. Theyâ€™re all phenomenal talents and would immediately bolster the Jets receiving corps now and in the future.

This receiving class is loaded. Thatâ€™s why Iâ€™d prefer the Jets to wait till day 2 & 3 to pick a weapon or two for the same. Rather than go through all the incredible talent I highlighted 4 guys I think would be the best fits or are my favorite receivers.

Justin Jefferson is one of my favorite prospects in this draft. Heâ€™s a receiver’s best friend and if he slips to day 2 and the Jets pick, the New York Jets should take him. Heâ€™s got a great mix of size and speed and would immediately become Darnoldâ€™s favorite target.

Michael Pittman is a former teammate of Sam Darnold. His catch radius is off the charts. Heâ€™s dynamic and heâ€™s got that connection to Sam. Pittman would become a great piece of this offense and heâ€™s a good personality on and off the field.

Antonio Gandy Golden is a guy whoâ€™s going to be available later in this draft. Golden reminds me of a slightly shorter and at this timeless talented Megatron Heâ€™s physical, lengthy and can make plays happen. Golden can develop and become a key piece of any offense.

Other guys like Denzel Mims, Tee Higgins, Donovan Peoples-Jones, Brandon Aiyuk, and KJ Hamler are all beasts and guys I like as well. The point is with all this talent, the Jets have no excuse not to upgrade their receiving corps.