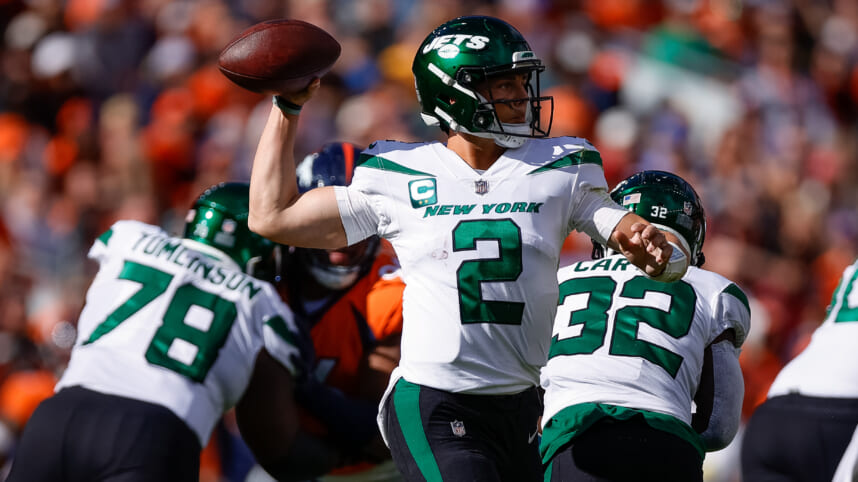 Happy Victory Monday, New York Jets fans. Four in a row, and it feels so good.

The 5-2 record the Jets have is their best since 2010. The current four-game winning streak is the first since 2015.

What stands out from yesterday’s 16-9 win, despite it being too close for comfort against a team the Jets are better than, was the adversity that they overcame.

Despite the drama surrounding Elijah Moore that took too much attention away from this team last week after winning in Lambeau and having injuries that kept Breece Hall, Alijah Vera-Tucker, and Corey Davis out, the Jets were down four offensive starters.

As multiple Jets players classified it after the game, “grimy,” the team certainly just found a way to win an ugly game, continuing to find different ways when needed to keep proving progress.

When it came to penalties, the Jets got crushed in this one. They committed 11 penalties for 85 yards in comparison to the Denver Broncos’ four for 34. The officiating did not give the Jets much help for the second week in a row. Still, the Jets have got to play with more discipline moving forward to keep up the winning.

What made the difference for the Jets in winning this one was taking the turnover battle. It was the type of day where the team that made the one mistake was likely going to lose. The Jets did not commit a turnover and got one interception defensively, taking the battle 1-0 for the day.

One final key for the Jets in winning this game was better execution on special teams. The Jets converted all four of their attempted field goal in comparison to the Broncos, missing two kicks, one of which was an extra point.

Jets’ secondary leads the way to another great outing:

The Jets’ defense allowed just nine points in yesterday’s win. A lot of that had to do with the strong play of the defensive backfield.

The Jets outside cornerback duo of Sauce Gardner and DJ Reed both had a whopping three passes defended. In the slot, Michael Carter II gave some timely contributions. The three yet again proved that they are all amongst their best at their respective positions.

Safeties Jordan Whitehead and Lamarcus Joyner also made some key plays. Joyner picked up the lone turnover in this game with a big interception late in the third, which significantly improved the Jets’ chances of winning. Joyner also had one pass defended. Whitehead had a pass defended, a few good tackles, and a big third and short stop reading a play perfectly that forced an incompletion.

The linebacker trio of the Jets had another stellar day. C.J. Mosley had eight total tackles and a near-game-ending interception. Quincy Williams had five total tackles, and Kwon Alexander recorded three. The two each had their speed on display on a few particular plays.

Finally, defensively, up front, it was not as dominant as the past few weeks, but key run stops and pressures were provided when needed. Quinnen Williams generated a pressure that led to the interception by Joyner. Williams finished with two quarterback hits. Bryce Huff and Carl Lawson split a sack, the only one the Jets had. John Franklin-Myers had one tackle for loss. Sheldon Rankins recorded a quarterback hit.

The Jets totaled 260 yards of offense in this one. Certainly, nowhere near good enough. Ultimately though, not having a turnover was a key that they found a way to execute.

In this game, 62 of the Jets’ 260 yards came from a Breece Hall touchdown run. Michael Carter finished with 74 scrimmage yards and had a big 37-yard catch and run that set up a field goal for the Jets.

Braxton Berrios finished with 42 total yards, 25 of them coming on a jet sweep. He also had three catches. Garrett Wilson had five targets come his way, finishing with four catches for 24 yards. He showed off his special quickness athletically after the catch on one screen he caught. Tyler Conklin also had four catches for 22 yards, picking up one big third down late.

To conclude here, it was by no means a good day for Zach Wilson. He seemed a bit off again, never really establishing a rhythm. He had one bad miss to a wide-open CJ Uzomah right in front of him over the middle. Wilson went 16-26 for 121 yards (4.7 per attempt), finishing with a 72.8 rating. The key was not throwing an interception for the third consecutive game. Wilson did have one nice 18-yard run.

This was a game on the road that would be tough, but one the Jets had to win, and they found a way. What good teams do. Now, the attention for the Jets turns toward beating the New England Patriots for the first time since 2015.