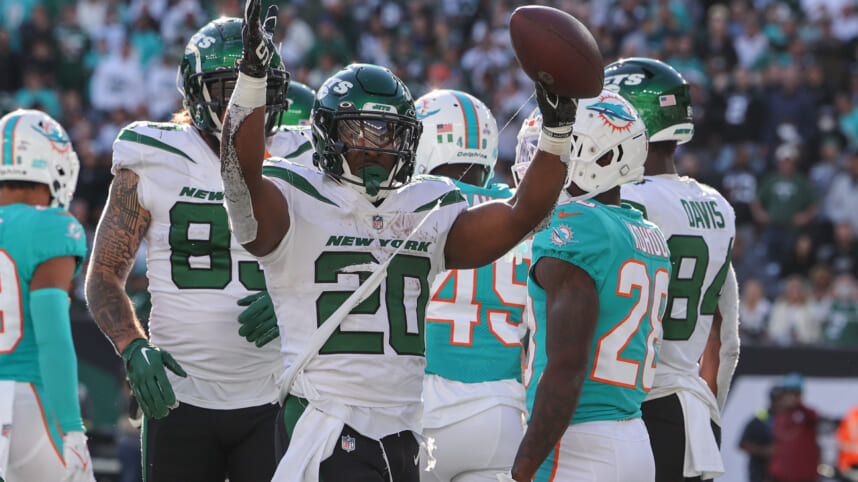 Happy Victory Monday, New York Jets fans. This football team is now 3-2 and took quite a few stepping stones for themselves in yesterday’s win.

Certainly, some exciting progress from this young team. Still, there are some areas for growth following yesterday.

Injuries certainly depleted the Miami Dolphins and the Jets allowed them to keep things close longer than they should have. Most notably, the run defense of the Jets had a disappointing day (137 yards allowed, 5.3 per carry) against a bad Dolphins rushing attack. It played a key part in the game being competitive into the fourth quarter.

Nonetheless, the Jets’ pass defense was in sync, both rushing the passer and in coverage. The pass rush was utterly dominant, especially down the stretch in this one. Most importantly, the Jets’ defense generated timely turnovers.

In just five games, Breece Hall is showing how special he can be for the Jets. Hall finished yesterday with 197 yards from scrimmage and a rushing touchdown on 20 touches. His big 79-yard catch early helped get things going for the Jets’ offense. The speed, patience, contact balance, and natural receiving ability of Hall’s complete skill set were just a few of the traits on display in yesterday’s win. Hall is just getting started for this Jets offense.

Up front, the Jets’ offensive line paved the way to some running success, finally. The Jets scored all five of their touchdowns on the ground. In total, 135 rushing yards were picked up. Hall and Michael Carter combined for 28 carries and 118 yards with three touchdowns. In the passing game, the Jets’ offensive line allowed just three quarterback hits and two sacks. Overall, it was a winning performance from the group.

Zach Wilson was efficient, throwing for 210 yards on just 21 passing attempts. The two keys with Wilson that were encouraging were his accuracy and minimizing turnover-worthy plays. With only 14 passes completed on the day and Hall generating the explosives, it was not the busiest day for the wide receivers and tight ends of the Jets.

Opportune day for the Jets’ defense:

The defense of the Jets let the Dolphins have their way for a little too long. Between the second and third quarters, they allowed 17 points, giving up some long drives. The Dolphins’ rushing attack was virtually nonexistent in the first four games, and the Jets somehow struggled with it yesterday.

Ultimately though, the Jets were opportunistic. Whether it was third down pressures caused, sacks, fumbles, or interceptions, the Jets’ defense came up with plays in timely situations.

It started up front with the dominance of the defensive line. Contributions were provided by Carl Lawson, John Franklin-Myers, Quinnen Williams, Bryce Huff, and Sheldon Rankins. In total, 16 quarterback hits were had by this defense. Carl Lawson had seven, along with a sack that caused a fumble. Franklin Myers had five quarterback hits and split a sack with Williams. Rankins continued to help lead the run defense in the trenches. Huff also got in on the action with a quarterback hit.

On the second level, C.J. Mosley and Kwon Alexander combined recorded 20 tackles, Alexander had one for loss on a fourth down.

The cornerback trio of the Jets delivered. Sauce Gardner, DJ Reed, and Michael Carter II contained Tyreek Hill and Jaylen Waddle to 70 yards. Gardner had an interception, a safety caused, and a pass defended. Carter had two passes defended himself. Jordan Whitehead also had a second-consecutive good game with seven tackles, one for a loss.

Overall, while it was closer than it should have been in the fourth quarter, the Jets did a great job of finishing. It is exciting to see this team at 3-2, playing competitive football. Now, the attention turns to the Green Bay Packers.