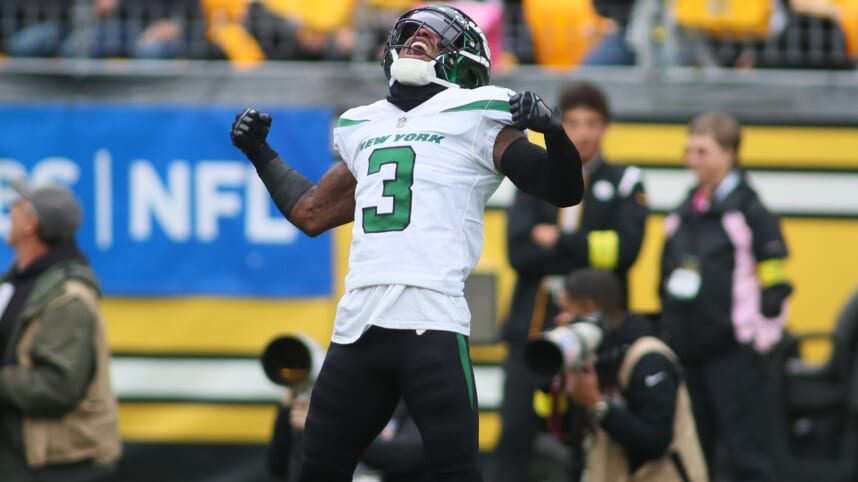 Head coach Robert Saleh deserves credit. This football team does not quit. Time and time again, when their backs were up against the walls, on both sides of the ball, the Jets made plays.

Starting on the team stats front, the Jets won the turnover battle 4-2, and it made a clear impact in this one. The time of possession battle was as close to even as possible, the Jets had the ball for 29:59. Along with possessing the football, most of the other team stats were practically split. Both teams were 100% in the red zone. Each club converted six third downs (15 att. for the Jets, 12 for the Steelers). Lastly, the penalty disparity was minimal, the Jets committed seven for 64 yards and the Steelers eight for 55.

Ultimately, the Jets winning in the turnover department made a difference in the team stat categories.

Best game for the Jets defense so far:

The defense was the main phase to step up for the Jets all game. They needed to have their first successful outing of the year, and they did so.

The Jets defense limited the Steelers’ offense to under 300 total yards. Splash plays were finally made across the board. Four interceptions and three sacks were recorded. Both safeties, Lamarcus Joyner and Jordan Whitehead, had interceptions en route to their best games of the year. Joyner picked off two passes and set Whitehead up on his. Michael Carter II had the other interception that set up the Jets’ game-winning drive. The three sacks came from the headliners of the Jets defensive line, Quinnen Williams, Jermaine Johnson, and Carl Lawson.

In terms of stopping the run, the Jets did a sound job holding the Steelers to 3.8 yards per carry. They limited Mitch Trubisky to 6.5 yards an attempt in the first half, leading to Kenny Pickett making his pro-debut. The Jets intercepted all three of Pickett’s incompletions.

Defensively, the Jets got contributions from every position group along all three levels in this one. They were balanced in slowing down both the run and the pass. The communication errors seemed to be cleaned up. The pass rush and coverage worked hand-in-hand throughout. Overall, this was a performance the Jets’ defense had to have. The key now is keeping it going.

On the other side of the ball, the Jets’ offense had a strong start and finish with lacking execution in the mid-part of this game.

The player with all eyes on him on his 2022-debut, Zach Wilson, had some ups and downs but delivered late when it mattered most. He went 50% in terms of completions, going 18-for-36. Wilson threw for 252 yards (seven per attempt) with a touchdown and interception. He finished with a 59 rating.

The most important things to take from this performance for Wilson were that he showed poise and looked calm yet confident from start to finish. He showed the escapability he has. Wilson also made big-time throws with accuracy. His clutch trait was also on display, going 10-of-12 for 128 yards with a touchdown in the fourth quarter and 5-of-5 for 57 yards on the game-winning drive.

Following the Jets’ 10-0 start and before their comeback with under 10 minutes to play, things were tough for Wilson and the Jets’ offense. He threw two interceptions, the first one was a decision he would certainly like to have back. His accuracy was off on some throws, mostly on the short and underneath stuff. If Wilson can work on eliminating these few things, as we saw late, he can be special for the Jets.

Catalysts for the Jets’ offense in this win were Alijah Vera-Tucker, Breece Hall, and Corey Davis. Big plays were also provided by Elijah Moore, Tyler Conklin, and Garrett Wilson.

Vera-Tucker had to fill in at left tackle following multiple injuries at the position. Per PFF, he allowed just three hurries with no quarterback hits or sacks allowed, impressive production, to say the least. Vera-Tucker is an unsung hero and player of the game for the Jets in their second win.

Hall shined in yesterday’s win. He had 19 touches (17 runs, 2 catches) for 78 yards (66 rushing), with the game-winning touchdown on the ground. Hall was yet another clutch player for the Jets late in this one.

Davis led the receiving attack with big second-half production. He finished with five catches for 74 yards and a touchdown. Davis did his thing over the middle on the intermediate level, reeling in the tough grabs for this passing game using his size.

From there, Moore had three catches for 53 yards, with another two yards on a backward pass. Conklin caught three passes for 52 yards. Wilson had two for 41 with a big 35-yarder.

Finally, the Jets’ offensive line stepped up despite losing their two tackles from the prior week. As mentioned, Vera-Tucker was great in George Fant’s place. Unfortunately, Max Mitchell went down, and Conor McDermott had to replace him. McDermott kept mistakes at a minimum. Lastly, with Vera-Tucker changing positions, Nate Herbig got the start at right guard and got the job done. Across the front, there were moving parts. The entire Jets line deserves credit.

This was a big must-win game for the Jets. Now, they have a chance to go over .500 at home against a division opponent in, the Miami Dolphins. It will be important for the Jets to start establishing a winning streak.