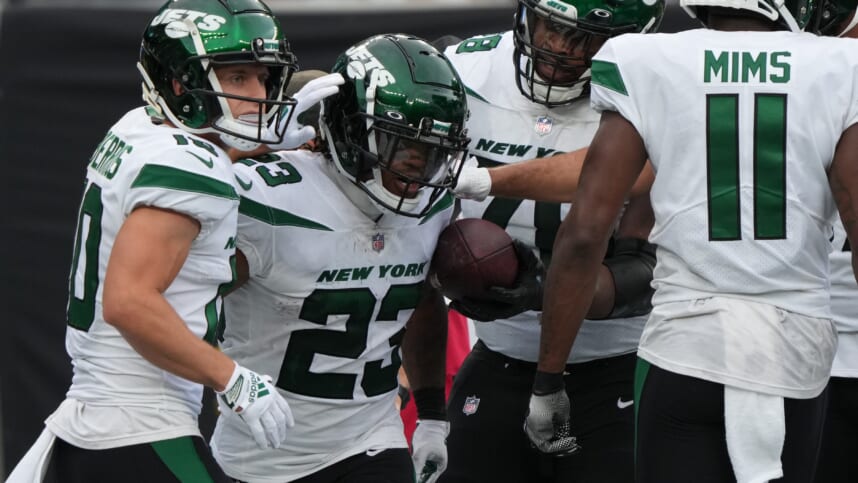 Happy game day, New York Jets fans. After a week off, the Jets take the field in New England today. For the Jets, an opportunity to grab ahold of first place in the AFC East in late November awaits.

The struggles against the Patriots are well-documented. With a win today, the Jets would snap a 13-game losing streak that dates back to 2015.

In order for that streak to break, the Jets are going to have to win the turnover battle. An area they lost to the Patriots 3-1 in the matchup from three weeks ago. Even with that disparity, the Jets only lost by five.

From the last matchup with the Patriots, the Jets need much better special teams execution and control of the ball with the time of possession. Poor penalties, especially in timely situations, have got to be limited. Also, the third down defense in the first half from the recent game with the Patriots was an issue that has to be better today.

In the red zone, the Jets have been 40% or better in their last two games. They will need a similar type of success to win today and get to 7-3.

All eyes will, of course be on Zach Wilson, who has struggled in both of his completed starts against Bill Belichick. As long as Wilson keeps turnovers at a minimum, the Jets will have a good chance of winning this football game.

It should be another game in which both Michael Carter and James Robinson have at least 25 carries. They should approach 30 total rushing attempts in this one against a middle-of-the-pack Patriots run defense that is allowing 120.7 yards per game.

If Belichick puts attention on Garrett Wilson, it could lead to the first big game of 2022 for Elijah Moore. Moore, now playing at his new position in the slot, hopefully gets more opportunities to help the Jets’ offense.

The Jets will be without Corey Davis for this one. It will be yet another great opportunity for Denzel Mims.

Defensively, the Jets made their way of replacing Sheldon Rankins official yesterday with the promotion from the practice squad for Tanzel Smart.

Rankins is a significant loss, but the Jets’ seventh-ranked defense should limit the Patriots’ offense to under 20 points (averaging 22.6).

The passing attack of the Patriots ranks 23rd in football with just 202.7 yards per game. The ninth-ranked pass defense of the Jets (201.1 yards per game), anchored by the elite cornerback trio of Sauce Gardner, DJ Reed, and Michael Carter II, should keep things under wraps.

As always, the Jets’ dominant defensive line will have to generate pressure. Led by Quinnen Williams, John Franklin-Myers, Carl Lawson, Jermaine Johnson, and Bryce Huff, a significant impact should be noticeable in the pocket all day.

In the end, this is absolutely a game that the Jets should win. They are the more talented football team. Simply, taking the turnover battle and not beating themselves in key situational ball will propel the Jets to a win. While it will not be easy, the Jets will win this football game by a field goal to a touchdown.