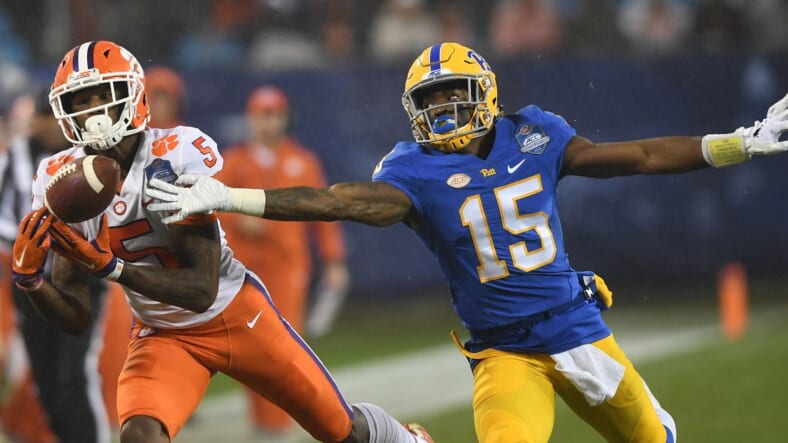 Clemson wide receiver Tee Higgins (5) can’t come down with a pass while being defended by Pittsburgh defensive back Jason Pinnock (15) during the 1st quarter of the Dr. Pepper ACC Championship at Bank of America Stadium in Charlotte, N.C. Saturday, December 1, 2018. Acc Championship

The New York Jets continue to look to round out their defense and establish depth in the secondary. This time in the form of 6 foot, 200 plus pound corner Jason Pinnock. Pinnock was a part of a talented high school football squad where he excelled at corner but also had 1,000 plus receiving yards and 15 TDs. Pinnock committed to Boston College originally before rescinding his commitment and choosing between Notre Dame and Pittsburgh. After picking Pitt, Pinnock never looked back.

Despite battling injuries early in his career, Pinnock showed flashes in his first three seasons, Pinnock still played in 21 games racking up 34 tackles, 2.5 TFLs, 1.0 sack, 3 INTs, 14 deflections, a fumble recovery, and a touchdown. He played a bulk of his snaps as a rotational corner and on special teams for those years before taking over as a starter last season.

Pinnock put up good numbers last season with 20 tackles, 3 INTs, and 1.0 TFL. Pinnock then put on a show at his pro day with a sub 4.50 forty and impressive vertical numbers. The physical makeup is there to be a good corner, but Pinnock needs to develop his football IQ rather than rely on physical skill. If he can developmentally, he can be potential outside corner option.

Although some have wondered why the Jets waited to invest in the secondary, the reports have stated Robert Saleh wants to go after late round guys and develop them to his liking, a la K’Wuan Williams and Akello Witherspoon. If he can get half that production out of Pinnock or Carter Jr., that would be a success.