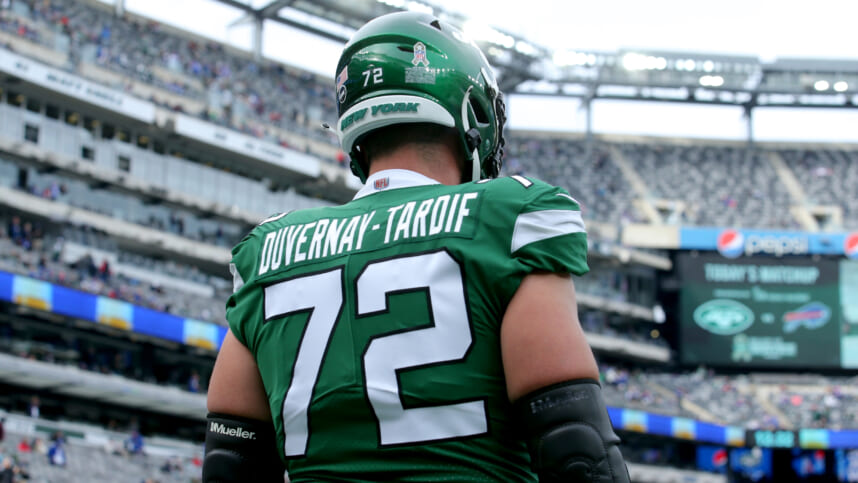 Joe Douglas just keeps on adding to the New York Jets’ offensive line. It was just announced by Ian Rapoport of NFL Network that the New York Jets signed veteran guard, Laurent Duvernay-Tardif. This comes after he was brought in for a workout with the team yesterday.

Duvernay-Tardif spent the second half of 2021 with the Jets, playing eight games. He did some good things over that stretch, and there was reported mutual interest between the Jets and Duvernay-Tardif to re-up for this year.

Following his stay in Canada, with his medical background, where he completed a portion of his medical residency, Duvernay-Tardif is now able to play and is back with the Jets.

At the moment, he is signed to the practice squad. But he can be elevated to the active roster for gamedays whenever.

What Duvernay-Tardif provides the Jets with at this point in time is incredible depth. The interior of the Jets’ offensive line now has three good starters in Laken Tomlinson, Connor McGovern, and Nate Herbig, along with two very quality veteran backups in Dan Feeney and Duvernay-Tardif.

In total, the Jets now have five interior offensive linemen that give them the starting talent and depth required for the second half of 2022 as the Jets look to make a playoff push.

Not enough can be said about the way Douglas has continually attacked, fortifying this offensive line. The Jets have survived many injuries upfront and still look at a group more than capable of getting the job done down the stretch.