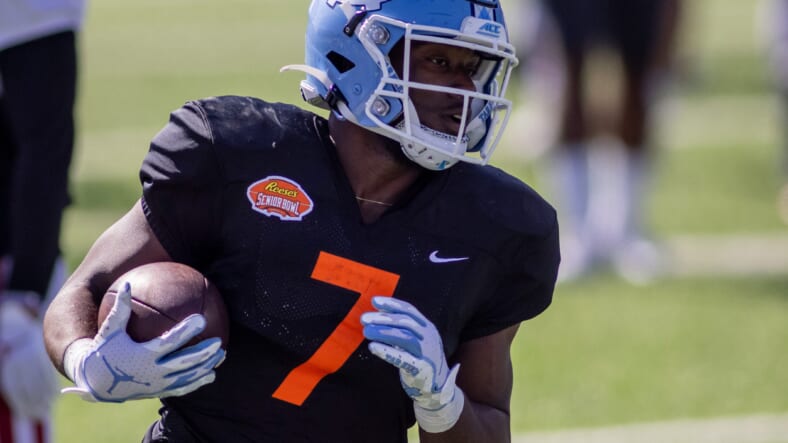 The New York Jets have selected RB Michael Carter from the University of North Carolina with the 107th pick in the 2021 NFL Draft. After drafting QB Zach Wilson from Bringham Young University, IOL Alijah Vera Tucker, and certified weapon from Ole Miss Elijah Moore. Now, the plan to put Zach Wilson in the best position possible continues. The Jets drafted a talented back in Carter.

In High School, Carter ran for over 2,500 yards in his senior season. The explosiveness carried over to Chapel Hill as he had 3,404 yards in his time with the Tarheels. That number puts him in the record books with the fourth best total in the school’s history. His burst and athleticism is evident in all facets of his game.

Last season on the ground, he rushed for a whopping 8.0 yards per carry, which was fifth in the NCAA last season. He also had 684 yards before contact, which was fourth best in the college ranks last year. On top of that, he had 267 yards receiving and 11 total scores last season. Oh yeah, and he did this alongside fellow draft pick and now Bronco running back Javonte Williams.

His talent is apparent, and he’s an even better guy off the field. He was voted team captain, and despite the fact he and Williams could’ve been at odds competing for reps, he was happy taking whatever role possible to benefit the team. Carter projects as a top-tier change of pace back at the next level, and he will slot in with Tevin Coleman, La’Mical Perine, and Ty Johnson as the backfield committee looks set heading into the 2021-22 season. This should allow the pressure on Zach Wilson to continue to ease while providing Mike LaFleur even more weapons in his first season as Offensive Coordinator.