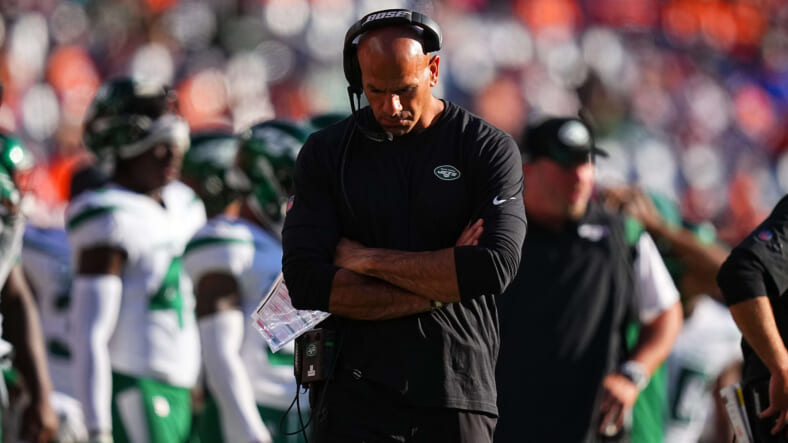 The first player Saleh named, Corey Davis, remains “day-to-day” and stated that the veteran wide receiver will not participate in practice today. Some tough news here. The good thing is the Jets got another one of their starting wide receivers back today, and he seems to be reinvigorated.

Elijah Moore was on the practice field at Florham Park today. He and Mike LaFleur had a good moment before practice, certainly an important dynamic for this team worth following.

DE John Franklin-Myers has an illness:

The lone new update on the injury front provided at Saleh’s presser today. Versatile defensive lineman John Franklin-Myers is dealing with an illness. Saleh stated the team sent him home.

As a run defender on the edge and a pass rusher both on the inside and outside, Franklin-Myers is a crucial player to the Jets’ defensive line.

It seems like some progress has been made by the Jets’ rookie edge pass rusher. After not practicing at all last week, Jermaine Johnson was a limited participant in today’s practice. When asked if Johnson could go this week, Saleh stated, “He’s got a chance. We’ll see how this week goes.” Especially with the Franklin-Myers update today, Johnson’s availability becomes that much more important at the left defensive end position.

Nothing really new here. Duane Brown will likely be mentioned the rest of the year on the injury report playing through his shoulder injury.

Quincy Williams obviously played in Sunday’s game and should once again be good for this upcoming game.

Ashtyn Davis, who was a full participant in the last practice Friday, ended up not going Sunday. He has played at least 62% of the special teams’ snaps in all six games he has played this year.