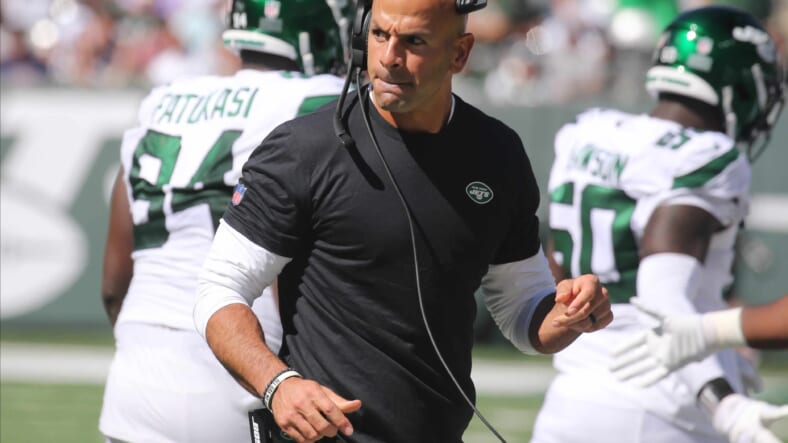 To no surprise, most of the talk surrounded Zach Wilson. The Jets’ 23-year-old, second-year signal-caller came off a historically bad day. One in which he threw for 77 yards, 3.5 yards per attempt, and held the offense to a total of two yards in the entire second half.

Unfortunately, for Wilson, despite it being only year two of this regime, the Jets have hit the accelerator when it comes to their growth, leading to heightened expectations way sooner than one could have imagined.

This is still a 6-4 football team well in the playoff hunt and more than deserving of playing beyond the regular season.

Knowing that it leads to all promises being off in terms of the Jets accommodating to Wilson and his status as the starter, no longer allowing awful performances like the one yesterday.

The first question Saleh got asked was about the current state of his quarterback situation. He said the following, “We’re keeping everything on the table over the next couple of days.” On committing to Wilson, Saleh stated, “Not right now. Not until I’m done evaluating everything.” This quote certainly makes things interesting.

Following strong, committal comments to Wilson as recently as yesterday, Saleh was asked what has changed. He had this to say.

After yesterday’s debacle, Wilson made a loud comment simply stating “No” when asked if he felt like he let the defense down after their dominant day. On that statement, Saleh was asked how he felt and shared this.

“Obviously, football is an emotional game. I’m not gonna shy away from the fact that I do think he is the ultimate competitor. He wants to win just about as much as anybody. He works as hard as anybody. It means so much to him. Can he be a little bit better in front of you guys, when he’s up here on the podium, in terms of the expectation that when you are standing in front of the podium it’s our job to take bullets, and own it? Especially, when it’s time to own it. Yeah, of course, he can. But I don’t think it’s indicative of how he feels about his team or teammates and I don’t think he is naive to the fact that you know, offense didn’t play to the best of their ability while the defense is out there balling, I don’t think that’s what he was trying to convey. I really don’t. But, yeah obviously, he can be a little bit better. I think he’ll be better for it.”

A whole lot to unpack following a forgettable day. It does seem like there ultimately is a chance that the Jets may make the move from Wilson to Mike White. One fascinating development.

Obviously, at this point in time, nothing is official or confirmed in any way. But, the key point holds that the Jets are, at the very least, contemplating a move, and one that is more than deserving.