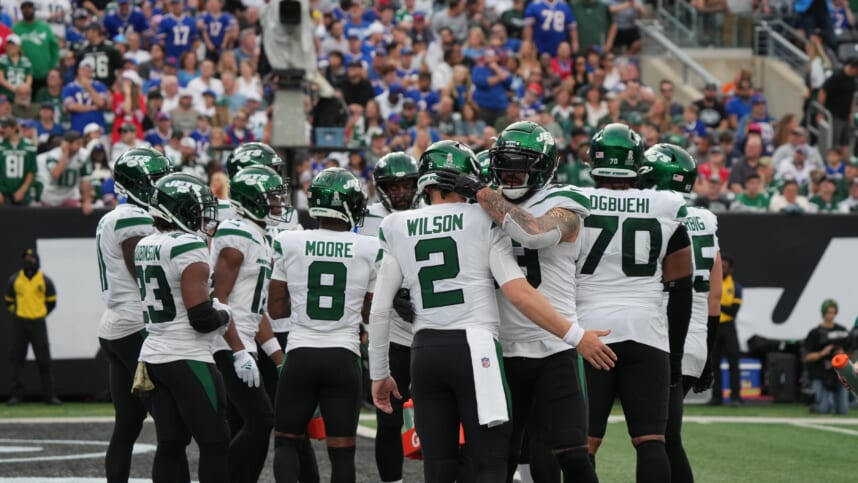 The New York Jets just pulled off one thrilling victory. With a prime test against arguably the best team in the NFL, the 6-1 Buffalo Bills, the Jets found a way to win a 20-17 sensation.

Jets offensive coordinator Mike LaFleur had an outstanding day. He committed to the ground game all day, for four quarters, as the Jets eclipsed 30 rushing attempts. The offensive line of the Jets had an impressive showing, leading the ground game to over five yards a carry and limiting the Bills to two sacks. When it mattered most, on the game-winning drive, the Jets’ offensive line led the way, as the Jets ran the football at will to take a three-point lead with under two minutes in the game.

Michael Carter had 12 carries for 76 yards, and James Robinson 13 for 48. LaFleur kept it as balanced as possible.

Most importantly, LaFleur was able to get Zach Wilson to stay calm and have a good game. His lone turnover was a fumble on a strip sack. Wilson went 18-25 for 154 yards with a touchdown and a 101.1 rating.

Garrett Wilson had another awesome day leading the Jets’ passing game. He and Zach continue to build their rapport week by week. Garrett finished this game with eight catches on nine targets for 92 yards.

Finally, on offense, Denzel Mims stepped up and made one big, crunch-time play for the Jets when it mattered most. On a third down, with the Jets looking to wipe more time off the clock and make the Bills use their three timeouts, Mims defeated physical press coverage on a slant and hauled in a big catch on third down.

The New York Jets defense rises up against top-tier challenge:

The Jets’ defense put together one impressive game against a prolific Josh Allen-led offense. They limited the Bills to a season-low 17 points. Allen threw two interceptions and had just 205 yards in the air.

He did give the Jets their only problems as a runner, with nine runs totaling 86 yards and two touchdowns.

From there, though, the Jets’ elite defense proved to everyone they belong in the conversation with the best.

On the defensive line, Quinnen Williams, Jermaine Johnson, and Bryce Huff all had a sack. It was probably the best game to date for Johnson, the Jets’ first-round pick. Once again, the pass-rush specialist in Huff had big rushes in timely situations. Huff was able to bring Allen down on one of the final few plays of the game, making the down and distance as unfavorable as could be for the Bills’ offense.

Lastly, the cornerback tandem of Sauce Gardner and DJ Reed stood up to the test against Allen, Stefon Diggs, and Gabe Davis.

Gardner had one big interception in the third quarter that led to the Jets’ first lead of the game. Both Gardner and Reed had a pass defended. On the final plays of the Bills’ final two drives, the Bills threw at Reed, and on the final play, Gardner — both stayed in great position, causing incompletions, giving the Jets the win.

This was a big day for the Jets, and they undoubtedly proved themselves as a great team with this win.