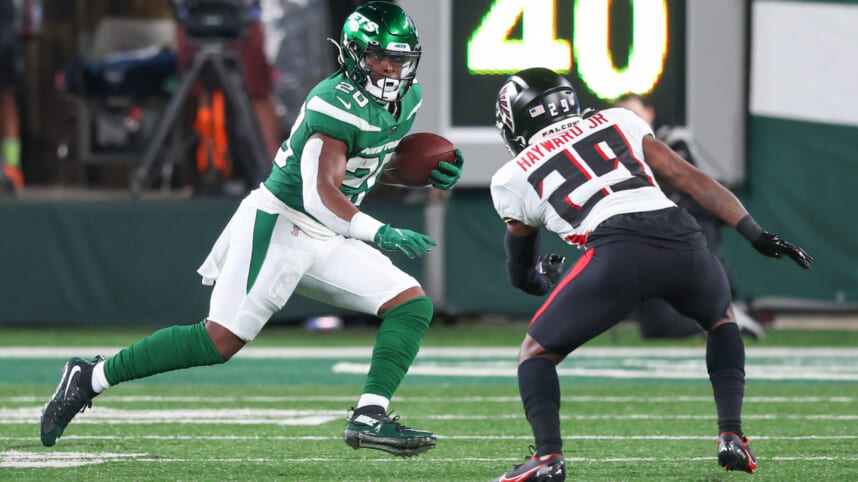 The worst-case scenario with the New York Jets star rookie running back Breece Hall has officially been confirmed.

It was just reported by multiple sources that Hall did indeed suffer a torn ACL and also has a meniscus injury that will sideline him for the rest of 2022. Just a crushing blow for the special rookie and this high-flying Jets football team.

Hall is one of the Jets’ most valuable players on the way to this great 5-2 start. The first-year player had 80 carries for 463 yards (5.8 per rush) to go along with four rushing touchdowns. As a receiver, Hall finishes with 19 catches for 218 yards (11.5 per catch) and a touchdown.

In total, 681 yards and five touchdowns. He was on pace for 1,653 scrimmage yards and 12 total touchdowns. On the ground, Hall was projected to run for 1,124 yards.

He was leading the Jets’ offense over each of the last four games throughout this entire winning streak. How the Jets respond to this will be one difficult challenge but no less something they must overcome.

Luckily for the Jets, they have one of the best second running backs in football with Michael Carter. He is a guy who would start on other teams throughout the league. The rookie year Carter had himself a season ago was impressive.

The Jets will undoubtedly need Carter as much as anyone to fill Hall’s void. From there, the Jets have had Ty Johnson on their roster since 2020. He does not offer the same speed and long strides as Hall, but Johnson does have some home run-hitting ability in his own right.

Obviously, a third running back will have to be added to the active roster. The Jets do have an undrafted rookie in Zonovan Knight on their practice squad, who they could elevate. If not, expect them to either sign someone off of another team’s practice squad, perhaps a familiar former Jet in Tevin Coleman or make a trade, which will likely not take all too much for the Jets to give up.

The hope with Hall now becomes a strong recovery. The good thing is that he is only 21 years old and turns 22 late next May. Timetables for ACL injuries are different for every player. Ultimately, just have to wish Hall the best with the process. He is special and more than capable of coming back better than ever.