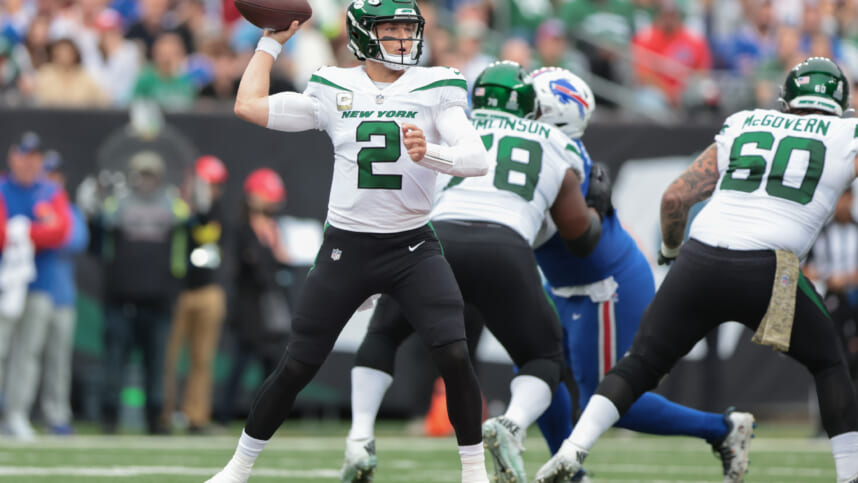 The ups and downs had by New York Jets second-year quarterback Zach Wilson have been a hot topic of conversation.

His forgettable three-interception performance in a home loss sparked much chatter. In back-to-back wins against top pass defenses in the Packers and Broncos, Wilson threw for a combined 231 yards, seemingly never looking too comfortable. He did, however, show some impressive resiliency in the Week 9 win with one of his best games of 2022.

Since returning from injury, Wilson has 1,202 passing yards (200.3 per game), a 57.5 completion percentage, four touchdowns, five interceptions, and a 75.5 rating. Perhaps, some underwhelming numbers. But Wilson has helped the team to a 5-1 record in his starts.

What has helped lead to success for New York Jets QB Zach Wilson:

What got Wilson calm and in rhythm was the fact that he was getting the ball out fast. Of his 25 passing attempts, 19 were thrown in less than 2.5 seconds. He completed 16 of those (84%) for 140 yards, a touchdown, and no interceptions, which led to a 114.9 rating.

Of his passing yards from the win Sunday, 91% came when he released the ball in less than 2.5 seconds. Mike LaFleur did a commendable job of designing quick hitters with, whether it be RPO’s, screens, play action, quick east, and west routes, and other simple, schemed-up reads utilizing some pre-snap motioning where Wilson could make decisive decisions. Wilson has such a quick release and showed in the Jets’ last game he can deliver the ball from different arm angles.

Wilson has shown the ability in five of six games to take care of the football. His escapability has been huge for the Jets in every game. He started to show last week that he will make defenses pay with his legs if they do not account for him as a runner.

It seems as if LaFleur has found a way to get Wilson to be efficient as a pocket passer. Getting the football out fast, simplifying reads, and relying on Wilson’s release and arm angles to throw accurate passes, he can be successful. After this encouraging game, in which he looked poised, it is fair to expect LaFleur to continue to dial up plays where Wilson can get the football out in less than 2.5 seconds.