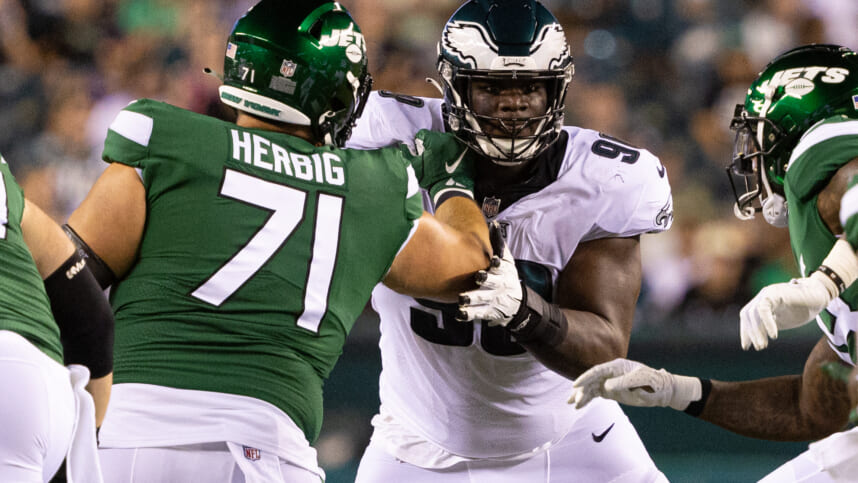 The moral of the story when it comes to the New York Jets’ offensive line in 2022 has been anything but consistency.

A total of five injured players at offensive tackle since training camp has constantly impacted things drastically. Multiple players across the front have needed to fill in and step up through only half of the season.

Of this unit, two routinely available interior offensive linemen, both set to be free agents after the year, Connor McGovern and Nate Herbig, have made themselves exceedingly valuable to the Jets.

A look at Connor McGovern, Nate Herbig’s success for the Jets:

Starting with McGovern, he has proven himself to be as durable as possible in three years now with the Jets. Since joining the team as a free agent in 2020, McGovern has started in 40 of 42 games the Jets have played. Not only that, but this is the second-consecutive year McGovern has been a true asset to the front with his strong play.

He has the desired physical measurables at 6-foot-4, 306 pounds. From there, McGovern is a terrific athlete who fits Mike LaFleur’s zone running schemes. He has had some impressive second-level blocks this year. Keeping mistakes at a minimum has been a constant with McGovern’s game over the years. Since 2019, he has committed just nine penalties. McGovern is also a good pass protector, as he has allowed just two sacks over 594 snaps (100% for the Jets’ offense) in 2022.

The Jets went out and claimed Herbig through waivers in early May when he was still only 23. He joined the Jets having already started 17 games with the Philadelphia Eagles in his second and third seasons in the NFL. When the Jets added Herbig, it was looked at as a tremendous depth signing for the interior of this offensive line.

Early in the season (Week 4), Herbig was already needed to start at right tackle with injuries across the line. Since he has played 100% of the Jets’ offensive snaps. Herbig offers a ton of size and physicality at 334 pounds. He has yet to allow a sack in 362 snaps. Herbig played a key part in both touchdowns the Jets scored last Sunday.

At this point, McGovern and Herbig have shown their ability and value to the Jets. Not only that, but the known availability they both provide to an offensive line that has been crushed with injuries makes their worth that much greater. McGovern, 29, and Herbig, 24, are key assets to the interior of the Jets’ offensive line. The Jets will need continued success from both players. If so, they will undeniably be top contract extension priorities for Joe Douglas come this offseason.