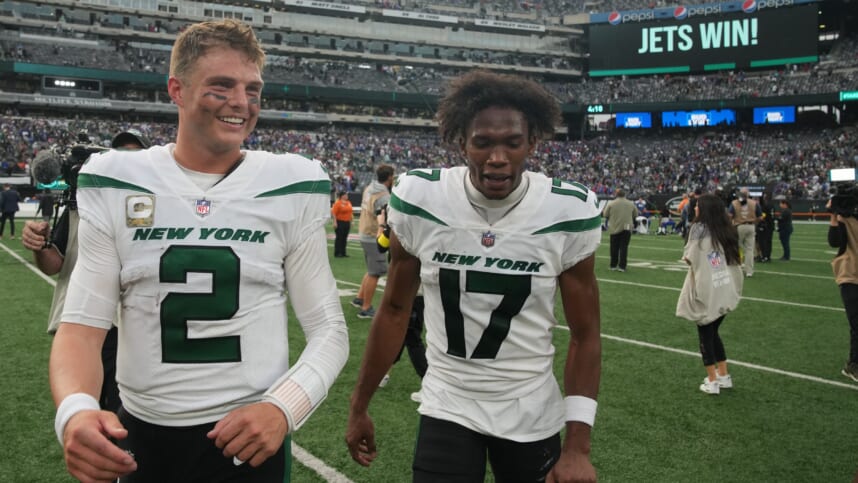 When the New York Jets drafted Garrett Wilson 10th overall, much was made of the marketable “Wilson-to-Wilson” connection that he and young quarterback Zach Wilson would form for years to come.

To start things off, unfortunately, Zach got hurt in the first preseason game and was sidelined for over a month. And when he did return in Week 4, the Jets were running the ball with great efficiency while going against some premier pass defenses, leading to minimal passing attempts a game.

In their first four regular-season games together, they only connected 10 times on 19 passes. They amassed just 100 yards over that four-game stretch.

However, over the last two weeks, the Jets have opened things up a bit more in the passing game, and the Wilson-to-Wilson connection is just beginning to heat up.

The recent success had by young New York Jets’ Zach and Garrett Wilson:

In the last two games, Zach has thrown 16 passes Garrett’s way. Of those 16 targets, 14 were completed, leading to a remarkable 88%. From there, Wilson and Wilson have picked up 207 yards. The two are averaging 14.8 yards per completion over this two-game stretch. Their longest play has gone for 54 yards.

Garrett offers a relatively complete skill set as he can line up out wide and in the slot. He can win on all three levels, both inside and outside the numbers. The rookie offers tons of athleticism highlighted by 4.38 speed, terrific quickness as both a route runner and after the catch, along with impeccable contested catch ability. After two awesome games in a row, Wilson is currently on pace for 79 catches and 984 yards, making for some prime rookie-year production.

After Zach had some struggles in Weeks 6 and 7, he has looked to Garrett, featuring him with his great talent, and it is paying off. Zach has all the arm talent with his quick release, the multitude of arm angles he can throw the football from, and of course, arm strength. Athletically, Zach is also gifted with escapability while being able to effortlessly throw with accuracy on the move. The young signal-caller has gone without an interception in four of his six starts.

Garrett has taken off as the player the Jets drafted him to be, this offense’s number one wide receiver and an easy, go-to target for Zach at all times. He has been a huge focal point throughout the last eight quarters for the Jets, and the exciting plays everyone hoped for have come from the quarterback to wide receiver duo.

Both Wilson’s are exceptionally young and talented. The Jets drafted them within the top 10 in back-to-back drafts for a reason. Zach and Garrett have all the desired traits to be special together. The Wilson-to-Wilson connection is just in the early phases of development and already looks promising.