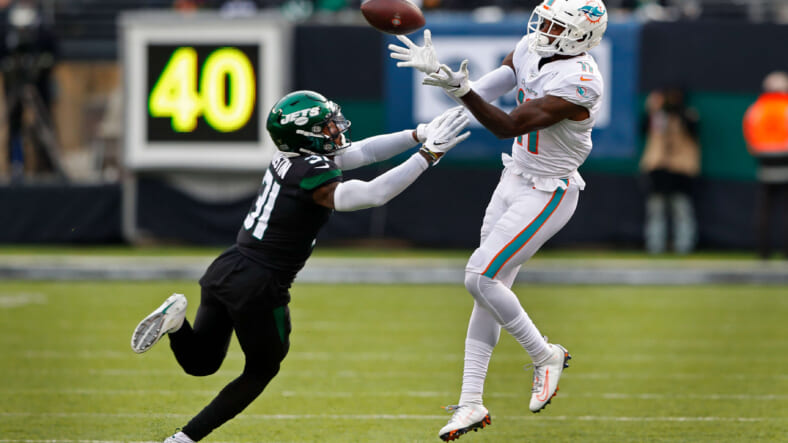 The New York Jets opted to wait until the latter stages of the NFL Draft to address their issues at cornerback.

With the offseason in the rearview mirror, ESM looks back on the green offseason that was, position-by-position. Our focus on the defense continues by looking back on the cornerback position…

Over the past two seasons…a pair of campaigns that could be informally referred to as the post-Trumaine Johnson era when it came to the cornerback depth chart…the Jets have tried to solve their cornerback issues in two different ways. First, they tried throwing veterans at the problem, but former Colts like Pierre Desir and Nate Hairston failed to resolve them. Both Desir and Hairston were part of the Jets’ autumn exodus of 2020, turning the primary corner slots over to younger talents.

To that end, the Jets have turned to the services of day three picks like Bless Austin and Bryce Hall. Austin was, for all intents and purposes, born to play metropolitan football as a Queens native and Rutgers alum. He’s been more than capable of playing an elite level, evidenced by the fact he was second in the Big Ten in pass breakups (14) during his sophomore season, though injuries have stunted his development. Over his first two NFL seasons, Austin has developed a reputation as a strong, aggressive hitter but he has struggled in coverage. Quarterbacks have tallied a 96.1 rating when targeting his receivers over his first two campaigns. Austin’s football story is one of the more inspiring in recent Jets memory, but he’s facing a make-or-break year in terms of on-field production.

Fellow projected starter Bryce Hall has a bit of a longer leash to work with. The Virginia alum was projected to be a top ten pick in 2019 by CBS Sports, but saw his stock fall after a season-ending ankle injury in his senior season. His personal plummet could work to the Jets’ benefit. Hall missed the first eight games of last season but provided a spark of hope for the future in the midst of a lost campaign by earning 36 tackles and an interception (a jaw-dropping one-handed takeaway in the Jets’ first win over the year against the Rams) over the second half of the year.

“He’s got length, he’s got a great brain and he’s got a thirst for the knowledge of the game,â€ new defensive coordinator Jeff Ulbrich said of Hall, per notes from the Jets. â€œThat’s where eventually he’ll set himself apart I think because he’s just so detailed and he’s a guy that’s like got the callus on his finger from taking notes in practice.â€

After the departures of Desir and Hairston, the Jets also employed the services of undrafted depth options like Javelin Guidry and Lamar Jackson. The former was particularly strong in slot coverage and could well play his way into another term with the team this summer. Former New York Giants draft pick Corey Ballentine arrived in November but made a far greater impact as a returner than a defender.

One would assume a defensive-minded head coach like Robert Saleh would try to bolster the cornerback group. Saleh, if anyone, would know the benefits of acquiring veteran help in the secondary from his days in the Bay Area. For example, San Francisco foe-turned-friend Richard Sherman became a valuable mentor to Emmanuel Moseley during the 49ers’ Super Bowl run in 2019.

But the Jets’ 2021 offseason, despite several bastions of hope, was doomed from the start in the sense that so many areas needed adjusting that some position group was almost guaranteed to be neglected. The cornerback slot was made to bite the proverbial bullet.

The Jets were mostly quiet on the free agency front, re-signing journeyman Bennett Jackson and adding Justin Hardee, a former New Orleans Saint better known for his efforts as a gunner than a defender. They finally addressed the cornerback spot in earnest on the final day of last spring’s NFL Draft, adding Michael Carter II in the fifth round before picking up Jason Pinnock and Brandin Echols in the sixth. Carter (no relation to his fellow New York draft pick of the same name) could immediately contribute in the nickel and slot, while Pinnock and Echols are likely long-term projects whose immediate futures lie in special teams coverage. Each rookie, however, could be pressed into action if the top veteran names falter.

The 2021 Jets’ cornerback endeavors are currently the definition of youth in revolt, as Hardee is the oldest representative at 27.

Much like the damage Le’Veon Bell left behind in the running back slot, the aftermath of the Johnson disaster possibly scared the Jets from bestowing big bucks on the free agent market. The 2021 class wasn’t exactly a game changer: the most notable names were either inked to expensive short-term deals (Kyle Fuller, one year for $9.5 million in Denver) or even pricier long options (Adoree Jackson to the Giants at $39 million over three years). None of the available names (William Jackson, Levi Wallace, and Shaq Griffin also among them) were going to push the Jets over the postseason threshold, so general manager Joe Douglas might deserve some kudos for not making a panic purchase.

Having said that, it’s surprising to see the Jets hold their ground with their current, unproven corner depth chart with veteran names like Sherman (one of Saleh’s most ardent supporters) and Brian Poole (a very serviceable green slot option over the last two seasons) lingering in free agency [EDIT, 11:55 a.m. ET: Sherman has been booked on charges of “Burglary Domestic Violence” in Seattle and has been denied bail]. It’s understandable that the Jets probably wish to ring in a new era with young, mostly homegrown talent, but that doesn’t mean that they should have to go about it alone.

Will the Jets regret waiting so long to address the cornerback slot? Follow @GeoffJMags on Twitter and continue the conversation