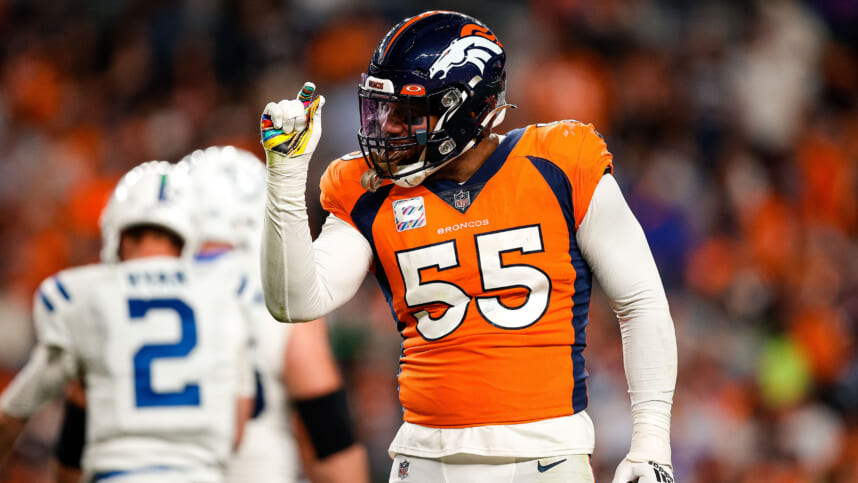 Following a disappointing home loss to end a winning streak, the New York Jets find themselves in the middle of the AFC playoff hunt.

Looking to get in the playoffs for the first time in years, the Jets would be buyers at the trade deadline this year in comparison to years past. Early this morning, after a rough divisional loss, the Jets were rumored to be interested in a game-changing pass rusher.

Despite their win yesterday, the Denver Broncos have wildly disappointed this year. Currently sitting at 3-5, they could look to be sellers with the trade deadline approaching.

One player performing well in a contract year, Bradley Chubb, could be a player they look to move for assets.

Even with loads of defensive end and pass rush talent, Peter King shared that per a “well-plugged-in GM,” the Jets are one of two teams reportedly interested in the 26-year-old edge rusher.

With Chubb set to be a free agent at the end of the year, the Jets would have to sign him to a contract extension if they were to acquire him. He is also owed $7.1 million for the rest of 2022. The reported cost for Chubb could be a first-round pick, which King wrote the Jets are “interested enough to consider.”

Chubb has been dominant so far in his fifth NFL season. In eight games, Chubb has recorded 5.5 sacks and two forced fumbles. He offers a ton of size at 6-foot-4, 275 pounds, while also having 4.65 speed.

While adding Chubb, a young, dynamic pass rusher, to this already talented group the Jets have is an exciting thought and would be a luxury, it is not ideal at this point in time. If he is not traded by the deadline tomorrow, Chubb could very well be had this offseason in free agency. At the moment, the pass rush of the Jets, that picked up six sacks yesterday, is not a concern.

As usual, it is great to hear Joe Douglas remains interested in adding more talent, in this case, though, the value may not make this a logical move.