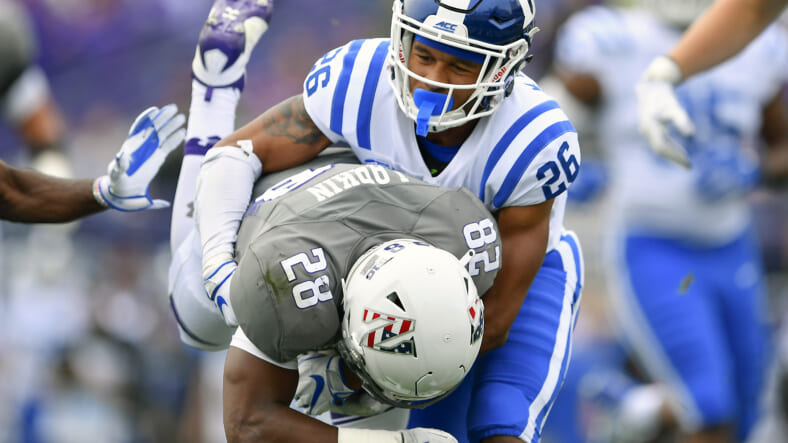 No, you’re not seeing double, the New York Jets selected Michael Carter Jr, but this one plays on the other side of the football. The Duke corner is 5 foot 9 1/2 and 186 pounds. The 4 year player at Duke did everything the right way. Carter waited in the wings, but quickly earned starting reps. His growth in his Sophomore season earned him the Willis Aldridge Award for best defensive back in the Blue Devils program. He then repeated as the winner in his junior year as well. Carter played the most snaps on the team in that season while taking reps at kick returner as well.

Carter has versatility and athleticism that will allow him to take reps at safety if needed, but more than likely slot in nicely as a corner for a team with minimal depth at the position. Carter runs a 4.30 40 yard dash and can keep up with some of the best burners at the next level. He also adds a dimension to Brant Boyer’s special teams unit given he could compete for the returner role.

Carter has had production at the defensive back position posting 41 tackles, 3.0 TFLs, 2 INTs and 8 passes defended last season. He also ranked in the top 10 in the ACC in passes defended and was a third-team All-Acc recipient.

Off the gridiron Carter is exceptional as well. Continuing the trend of high character additions, Carter was team captain his senior season and well regarded by the entire Blue Devil team. He’s got maturity and leadership traits that you long for in a developmental player. Carter may earn reps early due to a lack of depth, but his potential at slot corner (a position the Jets don’t have an answer at right now) is very tantalizing.