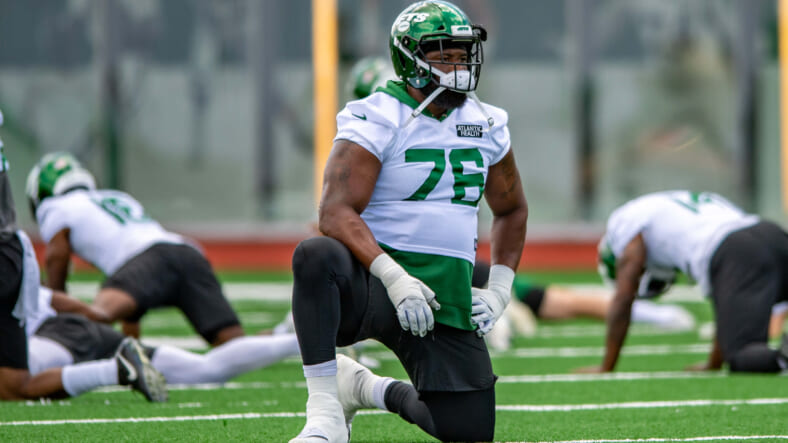 Coming off a bye, New York Jets head coach Robert Saleh met with the media for the first time in a week Monday afternoon. Nearly midway through, he was asked to provide injury updates to a few key Jets that the team could certainly use in New England this week.

It will be another game in which George Fant is out. Coach Saleh said yesterday that Fant will not practice at all this week.

Fant has been eligible to return from injured reserve for three weeks. Certainly, with a depleted offensive tackle group, still not having Fant available is tough. Hopefully, by next week, progress is made.

The rookie right tackle, Max Mitchell, who had an encouraging four-game start before an unfortunate injury, seems close to returning.

Coach Saleh made known yesterday that the team is planning on “opening up” his practice window as he works his way off of injured reserve. Mitchell has been eligible to come off of IR for two weeks.

Shortly after Saleh’s statements, the Jets designated Mitchell to return.

It is unknown whether or not he will be able to suit up this week. If he cannot, it will be the third consecutive start for Cedric Ogbuehi, who has filled in well.

With Mitchell set to return imminently and hopefully Fant briefly after him, this offensive line will be gaining some needed reinforcements, especially at tackle, where the Jets have had anything but consistency all year.