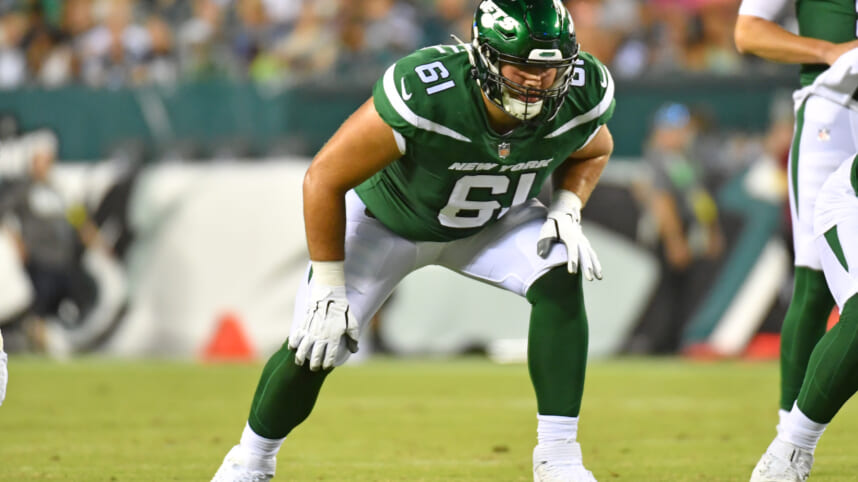 When the New York Jets selected offensive tackle Max Mitchell in the fourth round (111th overall), the expectation was he would sit and develop this year. Coming from a small school in Louisiana, Mitchell had talent, athleticism, and height but likely needed time to be ready for the pro game.

Well, with injuries to Mekhi Becton and Duane Brown before the start of the regular season, the Jets then needed Mitchell to step in earlier than anticipated. Through the Jets’ first three games, Mitchell has played 100% of the offense’s snaps. Even yesterday, head coach Robert Saleh spoke on Mitchell’s fast development from both a technical perspective along with his strength.

In the first two games, Mitchell executed on a solid level. Things were not great but considering where he was as a first-year player, the production was certainly adequate.

Then, come this last week, Mitchell broke out. And it has been discussed by the team, media, and fans alike. Mitchell had his best game yet for the Jets in Week 3. Let’s take a look at five of his reps in the running game on All-22 and highlight what he did that attributed to his success.

On this first play, the Jets run a late pre-snap motion with tight end Tyler Conklin to the play side of the outside toss for Michael Carter. Mitchell has to work up to the second level. Off the snap, his ability to move athletically is on display. He then does a good job of adjusting the angle he takes with a subtle lateral move to block Bengals linebacker, Akeem Davis-Gaither.

He is not quite able to place his left hand properly but using his athletic ability to get in good position, Mitchell is then able to use his size to seal off Davis-Gaither. Mitchell does a good job here and shows play strength to sustain the block.

On this play, the Jets run a jet-motion with Braxton Berrios to the play side of the stretch run for Breece Hall. Mitchell, working on the backside of this run, has to get himself in front of Bengals defensive tackle, Josh Tupou. He once again shows his athletic ability. Off the ball, Mitchell uses his lateral agility to get himself in a good enough position.

He is in a tough position to land his right hand properly. However, he does patiently wait to get in front of Tupou enough to get his left hand on in a good place. It allows Mitchell to generate some power and movement. Finally, he again proves his play strength to finish the block as Hall has to cut it back inside with the edge set.

With this rep, the Jets are running a zone blocking scheme that Mitchell is to the backside of again. Mitchell, with help from right guard, Alijah Vera-Tucker, who also had a great game that shows in a few of these clips, initially blocks Bengals defensive tackle, Zach Carter before he works up to the second level.

Mitchell has to get in position with lateral quickness. With the help of Vera-Tucker, Carter gets cut off and finds himself in an awkward position. Mitchell has good, low pad level with active hands ready. He keeps his feet churning laterally, then readjusts himself, moving toward the second level to seal Carter off from Hall. Mitchell displays both good lower body and play strength.

The Jets operate from the gun here. Their receiver splits are all close to the line of scrimmage. Corey Davis comes across your screen on a jet motion. Then, on the other side of the formation, Berrios, who looks like he will be a cross-sifter, ends up inserting as a lead blocker for Carter. Mitchell and Vera-Tucker work in cohesion off the ball again as Vera-Tucker works up to the second level.

Mitchell shows some burst off the line. With the sound angle he takes laterally, he gets himself in position to cut off his man. His pad level at the initial point is a bit high. It leads to some less-than-ideal hand placement. Nonetheless, Mitchell keeps his hands active through the rep and shows the required play strength to sustain and finish this block on his man using positional leverage.

On the fifth and final rep here, Mitchell takes two Bengals. He works with Vera-Tucker off the ball, quickly doubling BJ Hill. Then, Mitchell has the instinctual awareness to perfectly time his second-level block against Davis-Gaither. He exhibits some exciting and fluid change of direction ability here to get in position. Lastly, Mitchell uses his size along with aggressive hands to wall off the linebacker and helps Hall pick up his biggest run of the day.

In these clips, Mitchell is winning with, of course athletic ability showing burst, quickness, and change of direction. But also, instinctually, displaying an understanding of positional leverage, as well as using his frame, and from there, effort with a willing physicality, active hands, and overall play strength to sustain his block.

Mitchell is off to an encouraging start as a 22-year-old rookie with the Jets. Hopefully, he continues to build as a young player and establishes himself as a core Jet.