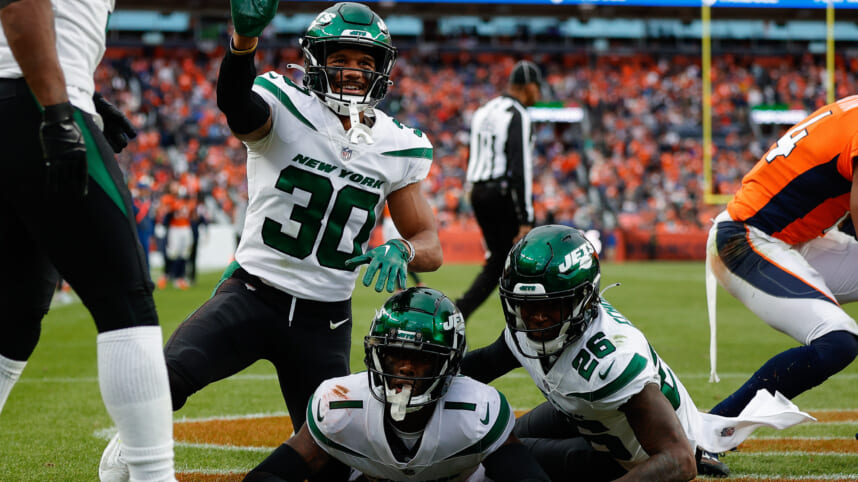 No Breece Hall. No Alijah Vera-Tucker. No Corey Davis. It could not be more ugly, but the New York Jets found a way.

They have now strung together four consecutive wins, remain undefeated on the road at 4-0, and are 5-2 on the year.

Today’s 16-9 win against the Denver Broncos could not be more of a slugfest for the Jets. Anchored by elite defense and special teams play, the Jets were able to pick up a must-win game.

The New York Jets’ defense has given up 19 points the last two weeks:

While today’s dominance from the Jets’ defense came in a different fashion, they carried the team on the way to victory.

The pass rush was not as dominant as the last three games. In turn, the tremendous back seven of the Jets in coverage stepped up all game long.

Starting with the ground game, the Jets limited the Broncos to 3.8 yards per carry. From there, they held the Broncos’ passing attack to 4.9 yards per attempt.

The Broncos ran a whopping 75 plays. However, the Jets limited their offense to a total of 324 yards. On average, the Jets’ defense held the Broncos to 4.3 yards per play.

What gave the Jets all the momentum and some breathing room was a key interception Lamarcus Joyner picked up late in the third quarter when it was still 10-9. On that play, Quinnen Williams generated a key pressure.

Within the final two minutes, the Jets’ defense got two huge fourth-down stops. They did not allow the Broncos to score in the second half.

On special teams, Greg Zuerlein, Braden Mann, Justin Hardee, Brandin Echols, among others, all contributed. Despite some tough wind, Greg Zuerlein, in total went 4-4 (one being an extra point). His three makes were from 33, 40, and 45 yards. On the other hand, Brandon McManus missed one long field goal attempt, but his missed PAT was crucial in this one.

Time and time again, the Jets’ coverage delivered with Hardee and Echols winning the field position battle. Mann came through with some big punts and overcame his lone mistake on a bobbled snap. This was the type of game, if either team made one glaring mistake on special teams, it would have cost them. The Jets executed well consistently in the third phase.

Offensively, definitely a tough day for the Jets. Aside from a Breece Hall 62-yard touchdown run, it was hard to get anything going.

For the second week in a row, Zach Wilson looked uncomfortable. The key with Wilson was not throwing any interceptions. Mistakes were limited as best as possible by the Jets offense as a whole, with no turnovers.

At the end of the day, it was a tough, hard-fought victory that the Jets needed to have. Thanks to minimizing mistakes, which indicates progress, they ultimately found a way. It feels great to say that the Jets are 5-2.