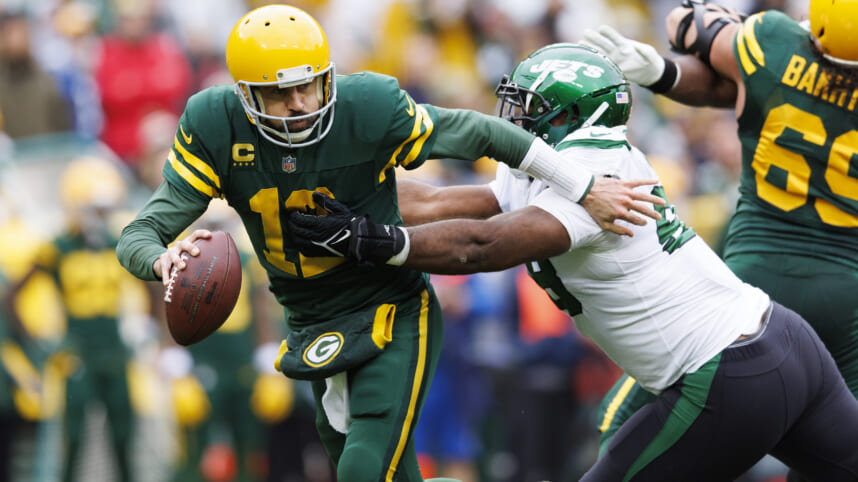 The 2022 season is off to an even greater than anticipated start than most had for New York Jets defensive tackle, Quinnen Williams.

Entering his fourth year, playing for a second contract, the former third overall draft selection in 2019 was expected to breakout in a big way. Through the first six games, Williams has gone so far with his dominance to shatter even the loftiest of expectations.

To this point, Williams has filled out the stat sheet in every game in a big way for the Jets. Throughout six games, he has five sacks (tied for 11th in the NFL), two of which came in the Week 6 win. Only in Week 1 did he go without a sack in a game.

Williams is on pace for 14 sacks and 65 pressures from a strictly pass-rushing standpoint. Nothing short of elite production.

He is playing as well as any defensive tackle currently in the NFL. Over the last few games, especially in Green Bay on Sunday, Williams has been as close to unstoppable as possible.

Not only is Williams impacting the quarterback with pressure, but he has also made a significant impact against the run and helped set up opportunities for his teammates by occupying attention from the opposing offensive line. He also contributes tremendously in ways that do not show up on the stat sheet. He has overbearing reps defeating offensive linemen and wins 1-on-1s with ease when opportunities arise.

In recent weeks, the Jets have unleashed some more games up front with stunts and twists. Williams has made the most of the confusion that it has caused for opposing offensive lines. Since the Jets made the adjustment in Week 4 at Pittsburgh, Williams has 3.5 sacks in three games.

From a personal perspective, Williams is set to surpass his previous career highs across the board substantially. His career-high in sacks (seven) will be broken soon, already being at five. In terms of quarterback hits, Williams’ previous best year was in 2020, when he had 14. Williams is already at 11 this year. Williams is also on pace for 11 tackles for loss, which would exceed his past best of 10.

Now, at 24 years old, this was what all had hoped for when the Jets drafted Williams with the third pick. He is not only one of the Jets’ best players or one of the best players at his position across the NFL but arguably one of the top players in the game right now. Williams is well on his way to getting a big contract from the Jets soon, as he should just be entering his prime years.