New York Jets are getting tremendous value from rookie pass-rusher 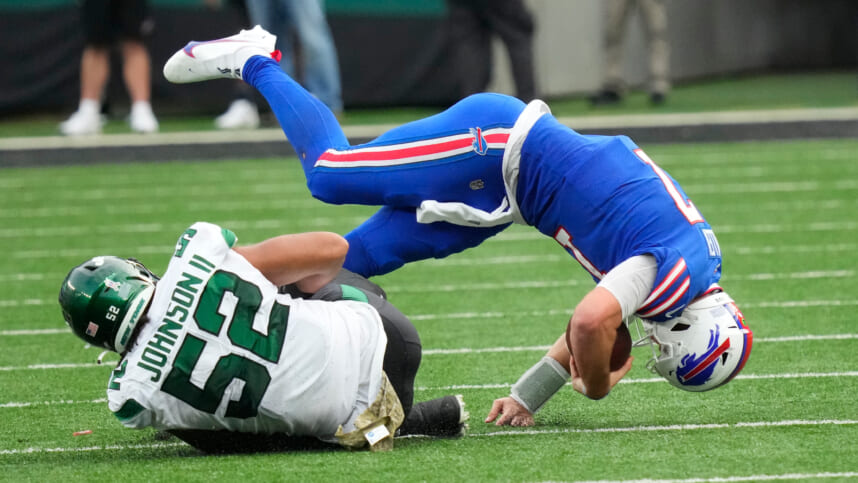 One of the many thrilling first-year players on the 2022 New York Jets is defensive end, Jermaine Johnson. The third first-round draft selection made by the Jets earlier this year was widely viewed as a steal at the time when the Jets traded up to get him.

Up until this point, even in a fairly limited role thanks to the consistent rotation with the immense depth on the Jets’ defensive line, Johnson has still made some exciting splash plays and proven so much promise.

Johnson is a talented 23-year-old with all of the qualities to be special. He is well-known and respected for his character, the effort he plays with, and his off-field intangibles. Physically, he has all the size at 6’4″, 5/8, 262 pounds, with 34″ arm length, which enables him to win with power.

He possesses magnificent athletic traits highlighted by 4.58 speed (1.59 10-yard split), quickness, and explosiveness. Johnson plays the run competitively while also having a variety of pass rush moves in his arsenal to be a force for years to come with the Jets.

Johnson suffered an injury that caused him to miss some time. To this moment, he has played in six games and totaled 113 snaps (18.8 per game). Of the six games he has appeared in, on average, Johnson has played 29% of the Jets’ defensive snaps with no more than 34% in a game.

Despite the lack of significant reps, Johnson has been impressive when on the field for the Jets’ defense. He has 2.5 sacks, three quarterback hits, three tackles for loss, and 13 total tackles (9 solo). Johnson has tallied up at least 0.5 sack in three of six games. On just his 113 snaps accumulated, Johnson is averaging a sack every 45 reps, pretty encouraging for the rookie.

Even while missing three games, Johnson is still on pace for 5.5 sacks, seven quarterback hits, and tackles for loss in year one. Those stat projections also come from being in a depth role that has him set to play 263 snaps as a rookie. Should his role increase throughout the second half of the year, those final stat projections would only go up, making the start of his career that much better.

The success attained by Johnson in 2022 has come as a result of his many well-documented gifts. His size, physicality, speed, athleticism, and, as much as anything, his motor, have paved the way to dominant pass rush and run defense reps for Johnson.

To see Johnson, after missing three games with an injury, return and make an immediate impact in the big win over the Buffalo Bills was very exciting. His sack on Josh Allen is why so many are bullish on his future. Johnson plays a tough, physical brand with exceptional effort while also having the athleticism to finish difference-making, splash plays.

It has been a long time since the Jets had a young edge rusher with elite upside. Johnson is off to a fast start with the Jets and has everything it takes to simply keep improving. At a premium position, Johnson is on his way to being a core, vital long-term asset to the Jets.