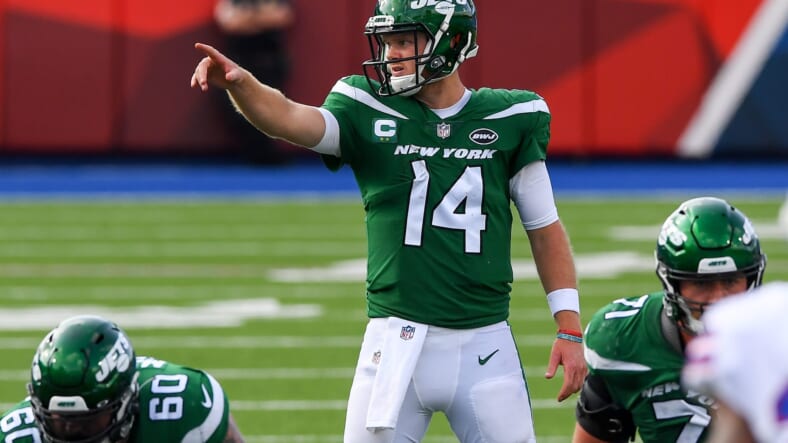 The hot button issue of the New York Jets organization right now is whether or not to trade former number three overall pick and presumed franchise quarterback Sam Darnold in order to clear the way for Clemson quarterback Trevor Lawerence. Now, in theory, as the Jets continue to lose, the likelihood of the New York Jets trading Darnold increases by the day. Here’s the thing though, Darnold has been bit by the injury bug in a big way during his first three years. Not only that, but with a career line of 6,934 yards, 39 TDs, 34 INTs, and an overall passer rating of 78.3, there are surely more proven commodities on the market. So, what does a potential market look like for Sam Darnold, and what kind of value could he hold?

Itâ€™s evident the Jets are tanking at this point. Roles are being cleared out for younger players to stake their claim to be here for the long haul, the incompetent coaches were not axed, and if a player needs extensive recovery time, they are getting it. Darnold is a prime example of someone who likely couldâ€™ve tried to play through an injury but was kept on the bench in order to protect him and, more specifically, his value in the long term.

In talking about Sam and his potential value, you cannot forget the fact that he is only 23 years old. Not only that, but he is still the same physically talented athlete who was selected out of USC just a short time ago. Darnold has regressed, though, due to poor coaching, injuries, and lack of talent at skill positions and in protection. At times though, despite all those circumstances, Darnold has looked like a special talent. There are still many within the league who agree with that statement as well.

If Darnold is to hit the trade market, there is hope the Jets can recoup significant compensation. Specifically, though, a first-rounder. If the Jets are unable to obtain a first for Sam, it is going to sting. Now, donâ€™t get me wrong, the floated around a combo of a 2nd and a 5th would be great, but not for a 23-year-old quarterback. See, the Jets should play hardball with Sam, if theyâ€™re going to draft Trevor Lawerence, they should and will trade him, but at the same time, they canâ€™t give him a way.

A 2 and a 5 offers great flexibility, but anything above that, particularly a 1st, would be a phenomenal deal. Josh Rosen was mediocre at best in his rookie season, and he fetched a 2nd, so Samâ€™s value should exceed that. Joe Douglas has shown in the past he is capable of making massive trades, a la the Adams to Seattle deal. Darnold may have flaws, but he could also be the missing piece for a franchise. A team like the 49ers, the Bears, or the Colts could pull the trigger on Sam because right now, there are not many other young and high potential options outside of the draft.

A team like the Bears may be reluctant to take a shot on Sam if they feel theyâ€™re a few pieces away. However, the Colts and 49ers have both shown they can be two of the top teams in the league when healthy, but both teams need a more talented and long term signal-caller. Jimmy Garoppolo and Phillip Rivers have had their moments just like Sam, but in Garoppoloâ€™s case, he is likely nearing his ceiling. As for Rivers, he has played solid football this year, but his days are likely numbered on his career. Trading for Sam could rejuvenate one of those offenses that have felt so stagnant this year while also landing the Jets premium draft capital and signaling the true beginning of a new era in New York, led by Trevor Lawerence.