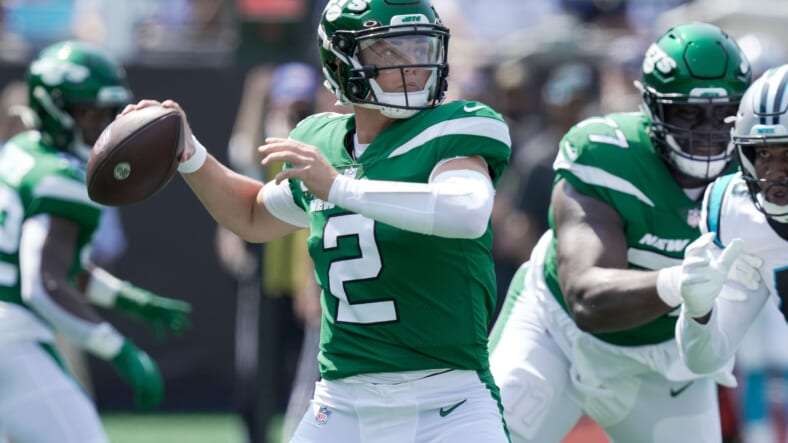 In the aftermath of the NFL’s most recent opening weekend, Canton’s sculptors are designing Jameis Winston’s bust while fans in Philadelphia and Cincinnati might be researching flights and hotels in Southern California for the second weekend in February.

Of course, Week 1 should never be used as an exclusive barometer for how an NFL season is going to pan out: in last year’s edition, the Jacksonville Jaguars, future bearers of a 1-15 ledger looked like a sleeper team after earning an upset win over Indianapolis. Tom Brady’s career was declared over for the umpteenth time after a loss to his new divisional rivals in New Orleans.

The New York Jets are used to kickoff weekend calamities as losers of five of their last six openers. Alas for New York, they’ve failed to defy the curse of Week 1, as each of the last six efforts has ended with a losing record. The theory that Gang Green has to pay some sort of “Jets tax”, where their simplest mistakes are held against them as comedy, also hasn’t helped.

Needless to say, the Jets’ 19-14 defeat at the hands of Sam Darnold, Robby Anderson, and the Carolina Panthers has only exacerbated the feelings of gridiron dread. ESM channels its inner Third Eye Blind and asks Jets fans to step back off that ledge…the season doesn’t end with Week 1.

The Overreaction: Zach Wilson is a bust!!!

Why Cooler Heads Should Prevail: Overreactions manifest most prevalently when it comes to quarterbacks. Nothing draws clicks and views better than a debate over the passer’s spot on the depth chart. Gridrion schadenfreude is perhaps best manifested through the struggles of rookie quarterbacks. Casual and professional observers alike are quick to pounce on any mistake.

Enough has been written about the Jets’ blocking woes on Sunday. Those passers built for the NFL game know how to adapt to uncomfortable situations and Wilson struggled to do so in the first half (6-of-16, 84 yards, and an interception) as the Jets fell behind a 16-point margin. The amateur critics on social media were quick to attack, ready to place Wilson in the same halls as fellow first-round washouts Richard Todd, Mark Sanchez, and Sunday’s opponent Sam Darnold.

But Wilson’s recovery and ability to dodge the defenders allowed through (especially after a stagnant preseason in the pocket) was inspiring to watch. Those traits were best on display through Wilson’s pair of scoring passes to Corey Davis, ones that drew the Jets close in a game that had little business lingering in.

His adaptation and recovery in the latter half-hour 14-of-21, 174 yards, two scores, 123.9 passer rating) drew praise from notable names both domestically and abroad.

â€œI loved his resilience in the second half,â€ former NFL quarterback and ESPN analyst Trent Dilfer said, per Darryl Slater of NJ.com. â€œI thought he played terribly in the first half. And then the pieces I saw in the second half, I was really impressed. Iâ€™m like: Wow, that takes a lot of resilience for a rookie â€” to go in at halftime, getting your butt kicked in your first start, and come back out and really settle down and play with structure and timing and make some plays. I was impressed.”

“We want tough guys and dudes who have no quit,” Davis, Wilson’s new favorite target, said in a report from Al Iannazzone of Newsday. “Thatâ€™s what he exemplifies. Heâ€™s going to be great here. Iâ€™m excited to have him. Weâ€™re going to do great things.”

No one can deny that Wilson endured a roller-coaster debut. But it shouldn’t be defined by its opened half.

The Overreaction: Denzel Mims has to go!!!

Why Cooler Heads Should Prevail: The Jets continue to deal with the curious cause of Mims. He has gone from second-round consolation prize after passing on aerial talents to draft Mekhi Becton and their best potential homegrown deep-ball threat since Santana Moss to the constant source of speculation.

It took only a single 40-yard reception, one that set up the Jets’ final score of the day, for Mims to become the Jets’ third-leading receiver in Charlotte. But Mims partook in only three snaps, stuck behind journeyman Braxton Berrios and former Boston College quarterback Jeff Smith. Blunt comments from head coach Robert Saleh have only raised further red flags, as did the fact that Mims only saw three snaps on an afternoon where the Jets were already missing veterans Keelan Cole and Jamison Crowder.

“Heâ€™s been doing a good job getting himself a little bit better every day but, heâ€™s got to know, when youâ€™re not one of the main guys, you got to know all three spots and youâ€™ve got to know it at a high level so you can step in and take advantage of all those opportunities,” Saleh said this week, per notes from the Jets. “So, if the Z, the F, or the X needs a break, youâ€™re the first one that goes in because you know all three spots, you can execute at a high level and you can roll.â€

The Jets have invested a lot into Mims: Jeremy Chinn and Antonio Gibson were chosen within the immediate ten picks after him. If Cole and Crowder return for Sunday’s home opener against New England (1 p.m. ET, CBS), there’s a chance that Mims could land on the inactive list.

But there’s something to be said about Saleh’s willingness to hold someone who’s projected to be a major part of the offensive revolution accountable. This isn’t to say that Saleh and his staff are infallible…honeymoons end fairly quickly for metropolitan football head coaches…but it’s an early statement, an early gambit that can light a fire under Mims and set him on a good path for the rest of his career.

Mims’ situation should be watched for the rest of the season, but there’s no use in panicking after opening weekend. It’s worth seeing how Saleh’s gambit pays off. Saleh isn’t the only head coach on the staff who has a big opportunity granted to him by the Mims situation: offensive coordinator Mike LaFleur can leave an instant impact on a unit that has struggled for literal years by finding a spot for an embattled big-play threat.

The Overreaction: The Offensive Line is Going to Make Things Difficult All Year!!!

Why Cooler Heads Should Prevail: Hey, at least “Let’s Find Mehki Becton’s Replacement!!!” hasn’t gained too much traction yet.

Holding Becton’s injury history against him is a mistake…it’s still early in his career and football is a violent game…but there’s no denying his medically induced absence leaves the Jets in a prickly situation. This is a chance for general manager Joe Douglas’ constant tinkering and remodeling of the offensive wall to make their benefactor proud.

At the forefront is the arrival of Morgan Moses, who was added during the doldrums of July. Moses was one of the most impact post-minicamp signings across the league and perfectly fits into what the Jets were trying to accomplish this offseason: he fulfills a dire need (Douglas continues to make up for the blocking negligence of the Mike Maccagnan era) and has the big-game experience the fledgling Jets sought after helping the Washington Football Team capture the NFC East.

Getting the work in this offseason allows the Jets to welcome in an experienced, talented name, rather than scooping a name off the practice squad or the wasteland that is in-season free agency.

Moses will take over at right tackle while George Fant assumes Becton’s role as the left anchor. Fant struggled on Sunday but he believes that working with Moses is going to help him out. Their relationship dates back to offseason workouts and could pay big dividends as the Jets

“I learned a lot from him. It was not one of those competitions where we were not speaking to each other,” Fant said in a report from team writer Randy Lange. “We were coaching each other up (saying) I like this guy, I like this guys’ family. We’ve been close for a while. That was the cool part.”

Time…namely the next four weeks that Becton will undoubtedly miss…how that previously established relationship plays to the Jets’ benefit. But it’s something that should give them at least a little bit of confidence as they move forward into a landscape rife with uncertainty.