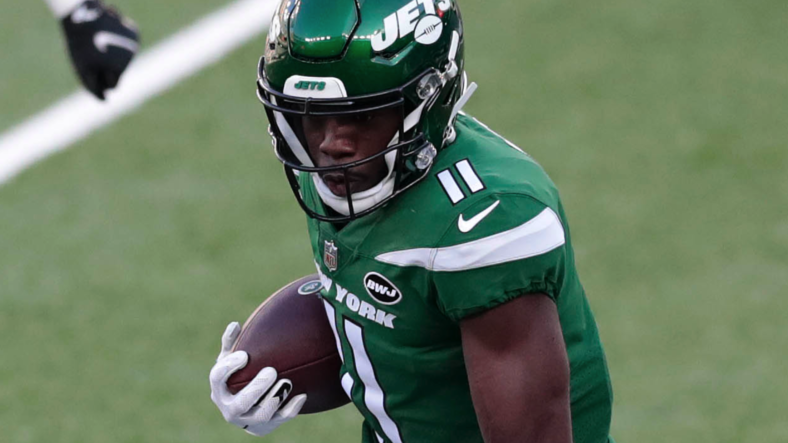 Mims, the New York Jets’ second-round pick from the 2020 draft, played only three snaps in Sunday’s loss in Charlotte.

The best thing you can say about Denzel Mims’ sophomore season opener is that he made the most of his limited opportunities.

Conversation around Mims has reopened after the New York Jets’ 19-14 loss to the Carolina Panthers in Week 1 action. Mims partook in only three snaps of the defeat, but featured heavily in one of the game’s most impactful plays: with three minutes remaining in the final frame, Mims’ 40-yard reception situated the Jets at Carolina’s 10-year-line. Corey Davis put in six points on a eight-yard pass from Zach Wilson to create what became the final margin.

Making the most out of limited opportunities has defined Mims’ infantile NFL career: the second-round pick from the 2020 draft tallied 357 yards over the final eleven weeks of last season, 10th amongst rookie receivers in that span. Hamstring woes ate away at his training camp and sidelined him for the first six weekends. Mims’ drafting was part of the Jets’ efforts to find the best of both offensive worlds. They chose blocker Mekhi Becton with the 11th overall choice, passing on several elite receiving talents. Mims, an aerial energizer out of Baylor, was chosen 59th overall.

Despite Mims appeared to be an odd man out of sorts after the Jets revamped their receiving corps this offseason, a relic of a prior coaching regime after the arrivals of Davis, Elijah Moore, and Keeland Cole. That idea gained further traction through Sunday’s snap counts: Mims’ trio ranked well behind reserves like Braxton Berrios (37) and Jeff Smith (9) on a day where both Cole and Jamison Crowder were each unavailable. Despite his late entry, Mims’ 40 yards earned on the aforementioned reception was third amongst New York receivers behind Davis (5 receptions, 97 yards) and Berrios (5 receptions, 51 yards).

Head coach Robert Saleh partly blamed the “sequence of the game” for Mims’ lack of reps, per notes from the Jets. He labeled Davis, Moore, and Berrios as his top three receivers in Carolina. Saleh also said that the Jets’ late offensive pace afforded the comfort to give Mims an offensive opportunity. The Jets’ final drive went 93 yards in 10 plays, doing so in 2:31 as they tried to erase a late two-possession deficit.

“(Mims) has been doing a good job getting himself a little bit better every day but, heâ€™s got to know, when youâ€™re not one of the main guys, you got to know all three spots and youâ€™ve got to know it at a high level so you can step in and take advantage of all those opportunities,” Saleh said. “If the Z, the F or the X needs a break, youâ€™re the first one that goes in because you know all three spots, you can execute at a high level and you can roll.”

“(Sunday) was more of a timing thing where offense really didnâ€™t get rolling until that fourth quarter, which is where you started seeing him show up on the football field,” Saleh continued. “We had those extended drives, I think we had a 10-play, 93-yard drive where the receivers needed a break, and it gave them that opportunity to step in and get action.”

Saleh also mentioned that Cole and Crowder “both have a shot to come back this week” as the Jets prepare for their home opener against the New England Patriots on Sunday (1 p.m. ET, CBS). Their potential reinseration could create an awkward situation for Mims, whose big-play potential and ability to gain yards after the catch made him attractive to a Jets offense in desperate need of big-yardage situations. Sunday opponent Jeremy Chinn and and Washington rusher Antonio Gibson were among those chosen in the next ten selections.

Finding a place for Mims could be a way for incoming offensive coordinator Mike LaFleur to leave an impact on the New York offense. LaFleur previously worked with the receivers in San Francisco and guided names like Kendrick Bourne, Maquise Goodwin, Deebo Samuel, and Brandon Aiyuk to breakout seasons.