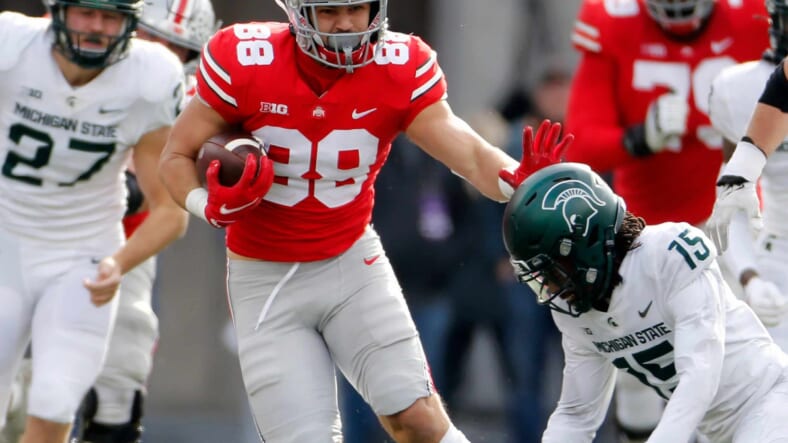 The New York Jets drafted Jeremy Ruckert, the Long Island native and childhood Jet fan, in the third round of the 2022 NFL draft. Ruckert is a young prospect who will turn just 22 years old next month. In his first year with the Jets, Ruckert is going to have a specific role with a few of his unique traits.

All four of Ruckert’s years of college were spent at Ohio State. He played in 26 total games and was primarily counted on for his blocking ability. Ruckert did score 12 touchdowns over the last three years. He recorded 54 catches for 615 yards throughout his college career. His best season of production was last year. Ruckert had 26 catches for 309 yards in 2021.

As a result of a foot injury, Ruckert could not participate in any of the athletic testing drills pre-draft. His physical measurables were recorded, though. Ruckert stands tall at a good height of 6-foot-5 and has a solid 252-pound frame. Ruckert also possesses a big 10 1/8″ hand size.

Ruckert’s good size enables him to win as a receiving and blocking tight end. While he could not display his athletic ability throughout the draft process, Ruckert does have good speed and can move with ease overall. Ruckert does run good routes and can create separation. His hands catching the football are steady. He proved the ability to make some incredible catches outside of his frame throughout college.

As a blocker, Ruckert wins with effort. He always plays tough and has a physical mindset. On zone-split runs where tight ends work across the line of scrimmage to block any backside defender, Ruckert has a great temperament in that role as a cross-sifter. That is something Mike LaFleur runs and an area Ruckert will have opportunities early on.

With newly-signed veterans Tyler Conklin and CJ Uzomah, Ruckert enters a perfect situation to be eased in as a rookie. He does provide stellar depth. In any three tight end sets, Ruckert will get chances. Even in some two tight ends sets on first and second down, he could gain some reps. As mentioned, with his ability as a sifter on zone-split runs, Ruckert will get playing time this year in LaFleur’s offense.

In the passing game as a rookie, Ruckert projects to see 30 to 40 targets. The Jets have a ton of skill talent and two tight ends in front of him. Anticipate two to three targets a week on average in year one. He should catch about 20 to 25 passes for 200 to 300 yards with a touchdown or two.

Knowing that tight ends take time to develop, Ruckert enters a perfect situation to grow. He will have a specific role as a rookie. Expect to see his great effort as a blocker. Even as both a run and pass blocker, Ruckert can still get better. As a pass-catcher, experience from reps will be the key for Ruckert. He hardly got opportunities in college but has the talent to be a contributor as a receiver over time. His size and mentality give Ruckert a chance to make contributions in 2022 for the Jets.